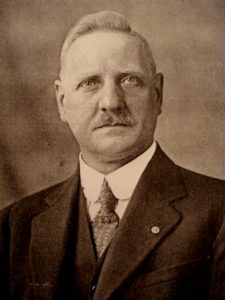 Willem De Cock Buning was born in Surakarta (Solo) in Java in 1880 then part of the Dutch East Indies. He left there for the Netherlands when he was 4. After schooling he went to work in 1903 for Dunlop and Kolff who exported goods to India, where he went as Commercial Representative for 2 years, and then for 4 years to Batavia and after that to Semarang . In the 1920s he joined Rotary and became a member of the S’Gravenhage RC in The Hague. He rose to become District Governor in 1928, and a few years later to RI Vice President and Director. In the intervening years he was given a post as an Associate Commissioner for Extension appointed by Rotary International to travel on behalf of Rotary. In that capacity, Buning spent part of 1929 journeying through Europe.

Paul Harris met Buning in 1928 when he stayed at his house. He wrote
about this:
“I spent my first night in Holland as the guest of the District
Governor, a gentleman who had spent sixteen years in Java, and then
returned to his native land to spend his remaining years in literary
pursuits and in doing just what he pleases.”

His first visit was to Vienna, one of three clubs with Prague and Budapest which had originally been developed with the help of Fred Molloy and the Doncaster Club. From Austria he went to a visit all the clubs in Hungary, before going to Novom Sadu in the post war country of Yugoslavia. There he inaugurated a new Rotary Club. Next he went onto Belgrade where he presented a Rotary flag to the club as the first club of its country. Heading further South, he proceeded to Athens where recently Jim Davidson had convened an inaugural meeting. Buning there presented the club with both their charter and with a Rotary flag. Following Davidson’s trail, Buning repeated the presentation of charter plus flag to the Cairo and Jerusalem Clubs.

After spending some time in India he wrote about it: “It gives me satisfaction to know an organisation of men who have the same scruples regarding business, and who are prepared to make sacrifices to bring improvements in social life’.

Buning was also one of the Rotarians who attended conferences of the International Auxiliary Language Association, along with PRI Walter Head and Dr Lester Struthers. This body was advocating a new international language like Esperanto to improve international relations.

En route to a meeting of lawyers in The Hague in 1932, Paul Harris was greeted in Boulogne by a group of Rotarians led by De Cock Buning “and his charming wife who had been with us in Chicago only a few weeks before”.