An Interactive Journey of Peace

» An Interactive Jurney of Peace 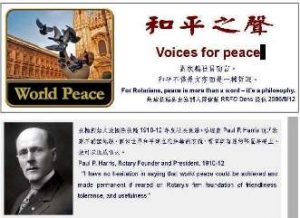 “The way to war is a well-paved highway and the way to peace is still a wilderness.”
Paul P. Harris
From a recorded interview in Tuskegee, Alabama, USA in 1945

“The Rotary way works! But Rotary has no patent on it, for it is but the Golden Rule in action.

Any person, any nation, can apply it by displacing negative hatred and fear with goodwill based upon understanding.

Peace among nations is not impossible of attainment; they can find peace if they will.”

In the middle of the twentieth century, two young people wrote a “religious” song, “Let there be peace on earth”, at a retreat, at Camp Herman, in the San Francisco Bay Area hills. The rights for use of the song, by Rotary, were granted to Rotary International by the authors.

“And when I attempted suicide and I didn’t succeed, I knew for the first time unconditional love—which God is. God is unconditional love. You are totally loved, totally accepted, just the way you are. In that moment I was not allowed to die, and something happened to me which is very difficult to explain. I had an eternal moment of truth, in which I knew I was loved, and knew I was here for a purpose.”
Jill Jackson Miller, author of “Let There be Peace on Earth,”
describing events in her early life that developed her unique philosophy of Peace.

Miller movingly speaks of her early life—how she became an orphan as a young girl, and her difficult journey through foster care, that led her into despair and attempted suicide. She describes that it was then that she realized the presence of a higher power in her life and how she eventually came to write the song. It is a song that has rippled and spread around the world, taking on a life of its own, as people began to live the message and share the song.

* To support the implementation of the strategic plan, RI will no longer have presidential emphases that change every year. This decision will help us to have greater continuity in our service, and achieve more significant goals over the long term.