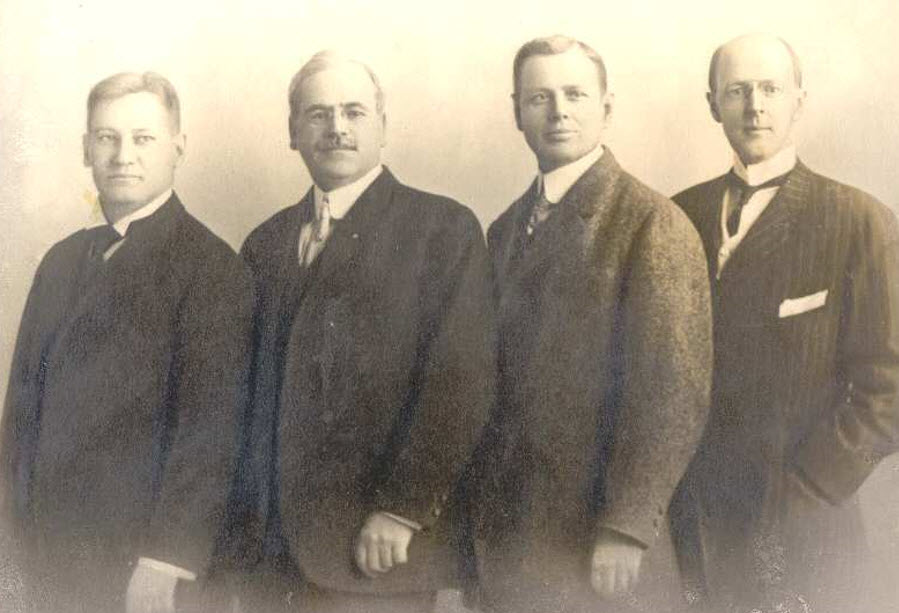 Of all the ‘Gang of Four’, Gustave Henry Loehr (far left), usually described as a ‘mining engineer’, is in some ways the least well remembered since like Hiram Shorey, he only remained in Rotary for a very short time.

Like Silvester Schiele, Gus Loehr was from a German background. Unlike Schiele, he was a first generation American, born in Carlinville, Macoupin County, Illinois, not too far from Chicago on 18 October 1864, the son of Johann Christian Loehr, a dry goods merchant, and his wife Frederika Knabner. Johann Christian was born in Brunswick, Germany 1827, as the 1880 census describes him as being aged 53.

His wife is also recorded in the census as born in Saxony and aged 49. The Loehrs landed from Europe in New Orleans, Louisiana on June 13, 1852.

They made their way North in the next few years. Of the seven children from the union of Johann Loehr and Frederika Knabner listed in the 1880 Census, Gus was the fourth. The oldest is Pauline aged 22 in 1880, and shown as “born in Illinois” as were all the other children. This suggests that the Loehrs arrived in Illinois before 1858 and settled there.

In Carlinville, the Loehrs set up a general store, while the children went to local schools. Gus’s two older brothers, Adolph and Theodore both worked locally as clerks. In Masonic records, Gustave Loehr is shown as a ‘jeweler’ on one document and as a ‘promoter’ and also as a ‘mining engineer in some of Paul Harris’ writing. In 1886 at the age of 22, he became a freemason, but only ten years later in 1896, he was suspended for non-payment of dues. However, after a further seven years he was reinstated and remained a mason until his death on May 23, 1918.

Gus Loehr Bio from “The Book of Chicagoans, a Biographical Dictionary of Leading Living Men of the City of Chicago” published in 1905 by A. N. Marquis & Company (the publisher of “Who’s Who in America)

It was at Gus’s office in the Unity Building on Dearborn Street, Chicago, that on the night of February 23, 1905, the meeting took place which led to the formation of the first Rotary club. Silvester

Schiele and Paul had dined together at an Italian restaurant on Chicago’s near north side. Gus, by prearrangement, had invited a personal friend of his, Hiram Shorey, a merchant tailor in the Loop.

Paul Harris wrote about him that, “Gustave’s personality challenged attention. His was a rare combination, the good in him easily outweighing the bad. He was a stormy petrel, vehement, impetuous, imperative, domineering, in one breath; then calm, docile, and lovable in the next. He was always thought compelling; his words were spoken with lightning like rapidity, and with such force that men frequently stopped in the street to look at him. His educational advantages had been limited, but his English was classical. Where he found the vocabulary with which to give his furious thoughts expression, was a quandary. Gus’ membership was of brief duration.

The feverish ups and downs of business resulted first in his resignation from membership, and a few years later in his death.

Requiescat in pace. Dear Gus, you rested little while here.”

Gus Loehr died suddenly in Chicago on May 23 1918 at the age of 53 when running to catch a train. He was buried in the family home of Carlinville.

Obit by Paul Harris in the August 1918 Rotarian Magazine

The fourth man was a mining engineer named Gustave Loehr. He was the host of that first meeting, as his three friends met in his small downtown office on that cold night. Like Shorey, Loehr spent little time with the club; he is known to have attended only the first three meetings before resigning due to his business interests. Only a few years later, as Rotary was enjoying explosive growth, Loehr suffered a sudden death. more…