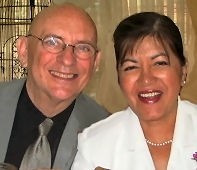 Ron was born in Arkansas, USA but settled in Louisiana before graduate study at Louisiana State and Ohio State Universities.

He was called after one year to return to his alma mater and appointed at SLU near New Orleans for 35 years as Music Professor, and later, GM for KSLU Public Radio.

His tenure in Rotary began in 1986 in Hammond, Louisiana. His father was a Rotarian, and now his son; three generations in Rotary.

Following the normal progression as Secretary and VP, Ron became President in 1995 for the 84 member Hammond, Louisiana club, serving as GSE Team Leader from District 6840 to District 1050, Assistant Governor for two terms, Outstanding Rotarian in 1998, and named Outstanding AG in 1999.

Ron was awarded a Visiting Rotary Professorship to the University of the Philippines in 2000 where he developed graduate programs in the College of Music. His students now occupy several prestigious positions in major symphonies in Manila, leader of the Disneyland Band in Hong Kong, and one is now a professor at the University of the Philippines. After moving to Angeles City, his wife Gloria, was President of her club in 2003, and he was asked to be her Secretary. He was very proud when she was named District Outstanding President. As a member of RC Clark Centennial, he wrote and had five grants approved by the TRF and was named Outstanding Rotarian of that club in 2010.

Ron’s contributions to TRF began in 1996 and he and his wife were named Major Donors in 2009.

In 1997 Ron became a charter member of the official Rotary fellowship, Rotarians On The Internet; serving on the Board of Directors since 2003, and as International Chair from 2007 to 2009.

In 2005 Ron travelled to Sabah, Malaysia to personally present the “ROTIan of the Year 2004-2005” award to P.P. George K. M. (Mingo) Chin, PHF, a ROTI charter member, board member, keeper of the birthday and anniversary list, stalwart and general ROTI sage since he joined ROTI in 1998.

During that time his efforts at District events raised the ROTI membership in the Philippines from 5th to 3rd in the world, and District 3790 to have the highest number of ROTI members in the world.

Travels have taken him to twenty five of the fifty US states.

International travels as a Malone Fellow, academician, and musician, have taken him to twenty-two countries during which he sought out the venues of Rotary clubs and was able to attend Rotary meetings in fourteen of them.
Ron was a frequent visitor to Honduras and organized “Horns for Honduras” and collected used band instruments for Honduras schools.

That led to a request from El Salvador to survey the needs of the schools in San Salvador a year later.
In 1999 he assisted with relief efforts after Hurricane Mitch.

Ron said that his favorite ROTI moments was when Gloria and he presented the ROTIan of the Year award to Mingo in Malaysia; developing matching grants with D6060, D1020, D6980, and attending RI Conventions in Chicago, Salt Lake City, Los Angeles, Montreal, and New Orleans.

Ron is also on the Board of Directors of The Clark Investors & Locators Association (CILA) which is a non-profit organization duly organized and existing under and by virtue of the laws of the Republic of the Philippines.
The association is recognized by and works closely with The Clark Development Corporation, Clark International Airport Corporation, The Metro Angeles Chamber of Commerce and many other associations, both regional and national.

Ron is a consultant at the Angeles University Foundation and directs the Center for American Studies and started DWAU 104.1 FM at the university. “Gives me something to do on Monday and Thursday” he says.

Ron has been a guest speaker in numerous clubs and districts including Davao, Cebu, Bacolod, Iloilo, and Manila.

Ron and his wife have been named “The Dynamic Duo” in tribute to their frequent seminars they give re Matching Grants, TRF, and using computers to become better Rotarians. Ron was named Chief Photographer for the Philippine Rotary Magazine in July of 2011.

Presently Ron is a Consultant at Angeles University where he directs the Center for American Studies and also for radio DWAU-FM 104.1. He is also a columnist for the Central Luzon Business Week and P.R.O. for CILA (Clark Investors and Locators Association). His professional educational and musical background may be found at his personal web site.

Ron learned about the Rotary Watch program and the work being done by Albert M.G. Gacia in coordinating the Philippine National Police Force with Philippine Rotarians. After meeting with Albert he introduced the program to District 3790. Ron was appointed District Director and subsequently arranged the signing of several agreements between the National Police and Rotary Clubs and Districts, virtually increasing the effectiveness of the Philippine Police by an additional 1,000+ volunteer surveillance personnel.

Gloria Anacleto-Nethercutt was born in Pasay City, Metro Manila, Philippines and grew up in Makati City where she achieved her college engineering degree from FEATI U and MLQU, Manila. She was involved in the construction industry for 12 years before starting a family business in leather-goods export and manufacturing – in Paranaque City, sometime in 1986. The family moved the factory to Angeles City in 1995, which later on became a permanent residence place for most of her siblings.

Gloria first attended a Rotary meeting in Las Pinas, Metro Manila, 1994, to collect her construction billing check from a client who was president then of that club. It became a practice for a month or so until Gloria found herself inducted as member, and later on doing the club weekly bulletin. Her brilliant work earned her an award as outstanding Rotarian and bulletin editor. After moving to Angeles City, Gloria, was invited by her sister May to join the Rotary Club of Mabalacat. Again Gloria was asked to do the club weekly bulletin which was adjudged as most outstanding in the district, an award that the club consistently received year after year, among other recognitions in community service.

Gloria was President of her club in 2003, and she asked her spouse Ron, a veteran Rotarian, to be her Secretary. She was named District Outstanding President. Ron and Gloria met in Rotary in 1998. As members of the global fellowship Rotarians On The Internet (ROTI), they made Rotary work in their personal lives. When Ron was music professor at the University of the Philippines under RI’s volunteer educational program, he and Gloria spent more time together and later on tied the knot in 2000.

Because of their international connections, District 3790 assigned Gloria as matching grant chair and Ron as GSE chair. Gloria kept the position for 3 years and assisted the clubs and the district in more than $500,000 in humanitarian grants.
Throughout the Philippines Gloria and Ron are known as “The Dynamic Duo” in tribute to their frequent seminars on Matching Grants, TRF, and using computers to become better Rotarians. At one district meeting when it was asked about appointing someone to an important committee position, PDG Mar OCampo said, “appoint either Glo or Ron, that way you get two.” Their combined enthusiasm in many different locations, convinced many Rotarians to go outside the district and enjoy the fellowship of their peers at international Rotary events.

In 2009 Ron and Glo became Major Donors to The Rotary Foundation; one of the first non-DG or PDG couples to do so in District 3790.

Gloria’s work in District 3790 included DG Special Citations 2003-2010, TRF newsletter editor in 2003-04, DGSC 2004-2008, DGSR in 2008 and 2010, Permanent Fund chair 2010-11, PolioPlus chair 2011-12. She is presently the editor of “the Breadbasket”, a monthly newsletter of the Rotarians On The Internet, a position she will hold until 2013. Gloria is a licensed real estate broker and uses her engineering degree to integrate construction planning, urban space/interior layout, and cost analyses to her consultancy work. 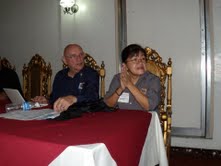 The Bahay Bata Center in Angeles City, Philippines is a home for street kids of Angeles City which also provides education, welfare, sports, medical and other facilities. The home was created as a major project by the Rotary Club Clark Centennial under the guidance of its Charter President Reynaldo Pineda.

The center was inaugurated on 25 July 2001 but struggled to provide sufficient nutritious food to its children until Ron and Gloria arranged the first of seven (7) Matching Grants which eliminated the problem while also providing educational material and computers. Many of the former “street kids” have moved on to full time employment and attending college.

Ron and Gloria are both presently members of the Rotary Club of Mabalacat, D 3790, Angeles City, Philippines.