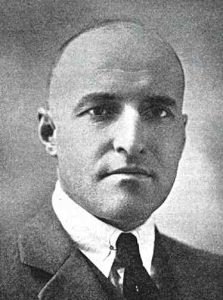 An early Halifax Rotarian, Jim Ralston, was also commissioned by Rotary International, along with Davidson. Colonel Jim Layton Ralston became Canadian Minister of National Defense from 1926-1930 and again from 1940-1944. In between from 1939-1940 he was Minister of Finance.

Col. J. Layton Ralston, King’s Councilor, D.S.O., C.M.G., D.C.L., C.C S., was appointed Minister of Defense in the Canadian Government in 1926. He was a well-known lawyer of Halifax, Halifax, Nova Scotia, Canada, and in 1921 was one of the two Special Commissioners of Rotary, along with Jim Davidson, who organized the first Rotary clubs in Australia and New Zealand. The picture appeared on page 30 of the November 1926 issue of The Rotarian.

A war without casualty lists does seem unreal. After a year and a half, Canada has had but 700 casualties in its Army, Navy and Air Force, a number to be compared with 15,000 for a comparable period in the last War. But let the casual visitor be not deceived. Canada is at war–to the finish. From the Atlantic to the Pacific she is throbbing with war activity. …