“The Johnny Appleseed of Rotary,” in PDF format prepared by Jorge Arman 2011 PowerPoint presentation, showing the many, many areas where Rotary began, with the assistance of Jim Roth. This remarkable work was created by RGHF member Jorge Arman Also see extract from “the First Rotarian” by James P. Walsh 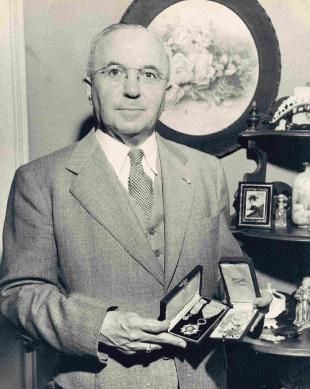 James Henry Francis Roth, best known as Jim Roth (or Don Jim), was born in Ventura, California, and died in his hometown at the age of 81 years.He studied at the Ventura Grammar School and founded the gymnasium in Ventura High School. In 1906, two weeks after he graduated, he was working as a secretary to a former judge of the Supreme Court, traveling and studying law at the same time. During his early years he took other positions as Paymaster, Accountant and General Trading. With his high level of culture, acquired by his travels around the world, he spoke fluent Portuguese, French, German and Spanish, in addition to his homeland language.

In 1914, at the age of only 27, he became representative of a large coffee dealer in the state of Sonora, Mexico, where he remained only a year.

James said that since childhood, he had wanted to represent his country and therefore, wrote to the U.S. Department of State to enquire about the possibilities of entering the U.S. diplomatic service. “It would be unforgivable, at the close of this snapshot of the settlement of Rotary in Brazil, to omit the name of the kind, clever, dynamic and efficient Jim Roth, an official of Rotary International with specific allocation to expand the network of Rotary Clubs, structure it and excite, guide and disseminate the spirit of service, heart and motor of the purposes of Rotary to promote understanding between nations. Jim, from the Rotary Club of Ventura, California, approximately 40 years, came to Brazil in 1928. Traveled 280,000 km, the service of Rotary; organized and founded 83 Rotary Clubs and helped in the founding of 12, totaling 95.

Organized and oversaw the wheels district conferences held here during their stay, since the first of District 63 (Brazil, Argentina and Uruguay), in Rio de Janeiro in 1929. There was asked how many problems with his personal magnetism and conciliatory spirit. He gathered extensive to the Secretariat of Rotary International in 1942 and, shortly after, is retired.

I had the privilege to know him, when the RC-Irati founded in 1941.”This paragraph extracted from a paper by Alberto Olavo de Carvalho, Brazil.

After receiving his Bachelor Degree, he was admitted to trade at the age of 19 years, being appointed guardian of the J.K. Armsby Company, now the California Packing Company (one of the largest such companies in the U.S.) in its reputable business of preserved fruit, fish, dried fruits, nuts, beans, etc.

He was with them seven and a half years and then went to Mexico for one year as representative of American firms. He then entered the United States Consular Service where he was worked for more than 10 years, taking consular posts in Guayaquil in Ecuador, Lima in Peru (the consular jurisdiction in Guayaquil covered Ecuador and Peru in Lima), and Pernambuco and Manaus in Brazil. In 1925 he was appointed Special Representative of Rotary International in Spain and Portugal (he had organized the Rotary Club of Lima while he was consul in that city) and in 1926 received the appointment of Special Commissioner of Rotary International. In December 1915, he was appointed vice consul in the city of Guayaquil, Ecuador.

On entering the Rotary organization, he resigned his post in the United States Consul. He organized the first Rotary clubs in Portugal, Venezuela, Colombia, Ecuador, Peru, San Salvador and Costa Rica and countless clubs in other countries where Rotary already existed. For more than 27 months he toured Central and South America in forming Rotary clubs.”

“Now in the country is the special commissioner of Rotary International, Mr James H. Roth.Roth, comes with the purpose of assisting in the installation of new clubs in South America. In respect to Argentina, Mr. Roth has been completely available to the governor and gamin Club Buenos Aires, to intensify the campaign accordingly.

After a few days in our country, which served to exchange ideas about the best way to guide the campaign plan, Don James departed for Asuncion in order to establish the first club Rotarians in Paraguay, then returned here to continue the work indicated.

We are confident that his presence will be very beneficial, not only because of the momentum that will give the extension Rotarians, but because his enthusiasm and energy are spread easily. Moreover, Don James is an individual treatment pleasant, interesting conversation and a good comrade with whom he was sympathetic from the outset.

“The above report from “The Chronicle of Rotarians Argentino”. October 1927Jim arrived in Brazil in August 1921, starting work in the consulate of Recife, for a year and a half. He was later transferred to Manaus, where, after another year and a half as vice-consul, he requested removal from office to deal with emotional problems caused by the death of his mother, and returned to California. He returned after his compassionate leave and recommenced working in various consulates.

He served in his consular career for 10 years, in the cities of Guayaquil (Ecuador), Lima (Peru), Recife and Manaus (Brazil).The first direct link by Jim Roth with Rotary International was during his stay in the city of Lima Peru, where, at the request of the Peruvian Ambassador in Washington, Sr. Frederico Alfonso Pezet and Fernando Carbajal (who later became President of Rotary International in the Rotary Year 1942-1943), he assisted in the organisation of the Rotary Club of Lima. He discussed all these matters with the Secretary of Rotary International, Chesley Perry, during a meeting in 1921.

In 1925, he received a telegram inviting him to a Rotary mission in Spain and Portugal for an initial period of 6 months. He accepted the invitation and with this new venture, met the challenges with enthusiasm and dedication. Also in 1925, Jim was received in audience by Pope Pius XI and conferred with the assistant secretary of the Vatican State, Bishop Pizzardo, on matters relating to Rotary and its relationship with the church.

Thence began his 17 years of service as Representative of Rotary International in Europe and Latin America. After a year of service in Europe, he came to Latin America in order to expand the Rotary clubs and assist in hosting and “helped” to create an unequalled number of clubs in an unequalled number of countries. The following is a list of countries where Jim was directly or indirectly responsible for the creation of Rotary Clubs.

More short Club stories as they are found

This history was copied from a Google translation of an article publishedby the Musea Armando de Arruda Pereira.
Acknowledgment is given to the Fundacio do Rotarianos de Sao Paulo.
During the 2008 year, Jorge Arman and Greg Barlow, neither aware of the other’s research, began compiling the biography and history of James Roth. By the end of 2008, both had completed their research, the results of which are both seen here.