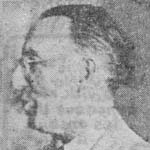 In ‘Peregrinations 3’, Paul Harris wrote:- So far as Rotary is concerned, Chile is one of the most intensively organized countries in the world, That country now stands fifth in number clubs, being outranked only by the United States, Great Britain and Ireland, Canada and France. Chile’s remarkable record is due to the devoted and capable organization work of the good pioneer Dr Eduardo Moore, past VP of Rotary International.” Harris wrote this in 1936 about Moore who had been selected to introduce Harris at the Ibero (South) American conference and to accompany him at various times during his stay in Chile.

Eduardo Moore’s interest in Rotary had been aroused in 1916 when he attended a meeting of the Chicago RC with an American lawyer, Richard Momsen, who had served as U.S. Consul General in Rio de Janeiro. At the same meeting, Herbert Coates, an English businessman who lived and worked in Montevideo, Uruguay, was also present. The three men talked to Ches Perry and became enthusiastic about the idea of starting Rotary clubs in their respective countries, Moore in Chile, Momsen in Brazil and Coates in Uruguay. However, it was to be 1924 before Moore was able to start Chile’s first club in Valparaiso.

Born in Berlin, Germany, August 30, 1895. Son of Edward Moore and Elvira Bravo Montero. Married to Isabel Rodriguez, with whom he formed a family consisting of her children: Edward, Elizabeth, Elvira, Patrick, Maria Cristina and Thomas.

He studied at the German School and the National Institute. Later he joined the Pedagogical Institute at the University of Chile title of professor of History and Geography. Laws also studied at the same university, swearing as a lawyer before the Supreme Court, June 4, 1920, after presenting the thesis “The food owed by law.”

For some years was a professor of history at the Liceo de Hombres de San Bernardo and the Ecole Militaire.

He joined the ranks of the Liberal Party, which served as vice president and president, assuming in 1938. He had an outstanding participation in the difficult moments of 1941, when he demanded that President Pedro Aguirre Cerda, amend the Electoral Act.

Re-elected MP for the 8th departmental grouping of Melipilla, San Antonio, San Bernardo and Maipo in supplementary election for the period from 1945 to 1949, replaced Enrique Osorio Madrid on October 17, 1945.
Also, he was elected Senator from the 5 th grouping provincial O’Higgins and Colchagua for the period from 1953 to 1961.

In addition, participated in the following motions that became law include: Law No. 5376 of January 23, 1934, Restoration and the provinces of Colchagua O’Higgins; Act No. 7878 of October 6, 1944, Exemption from taxes for municipal prosecutors Foundation for Orphans Asylum “Echeverria Diego Castro,” in the town of Quillota.

He was a member of the committee in 1938 that accompanied the Foreign Minister to Brazil and Argentina.
Moore served as minister of public education during the government of President Jorge Alessandri R., since September 15, 1960 to October 5, 1961. In this portfolio, highlighted by the initiative of an education reform plan called Arica, which is then applied throughout the country.

Among other activities he was a counselor at the Agrarian Credit Fund, a partner at the National Society of Agriculture, president of the Center for Law at the University of Chile, secretary of the Liberal Center of Santiago, and member of The Union Club.

He was Mason, a member of the Grand Lodge of Chile and promoter of ROTARY in Chile, being president of the Rotary Club of Santiago.

In Region VI, commune Paredones a rural school named after him.

Author of a biography of Juan Martinez de Rozas, and the works: Lives Against the Sea, The Ten, Youth, The University, among others.

He died in Santiago in November 1977.