On the frigid evening of February 23, 1905, four men met in a small Chicago office to discuss a visionary idea—the formation of a society of professional men for business and social purposes.

Although many such groups exist today, it was an unusual idea for the time; still, it seemed like a simple plan. But from that informal gathering rose one of the greatest service organizations in the history of the world; Rotary International. Now with over 1.2 million members in over 160 countries, Rotary is credited with countless achievements, from the war on polio to world hunger to education, community health, and civic events. Nearly every individual in the United States, and many others around the world, has been touched in some way by Rotary’s efforts. 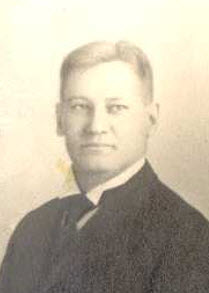 That meeting in Chicago is credited as the first Rotary meeting and, in turn, the four associates are now known as Rotary’s “first four.” They are indeed a group of men who share the same traits of vision and character. First among them was Paul Harris, an attorney who came up with the idea of the club, and its eventual name, Rotary. Harris devoted the rest of his life to championing the growth and causes of Rotary International and is revered even today by Rotarians worldwide. Harris’ close friend, coal dealer Sylvester Schiele, likewise was a lifelong Rotarian whose contributions to the organization were indeed great in number and scale. However, a third, tailor Hiram Shorey, was only briefly a member of Rotary in its fledgling early days.

The fourth man was a mining engineer named Gustave Loehr. He was the host of that first meeting, as his three friends met in his small downtown office on that cold night. Like Shorey, Loehr spent little time with the club; he is known to have attended only the first three meetings before resigning due to his business interests. Only a few years later, as Rotary was enjoying explosive growth, Loehr suffered a sudden death.

In his lifetime, Loehr received very little credit for his involvement in the founding of Rotary, and little is known of him today. But Gus Loehr should not be forgotten, as he was the host of the first Rotary meeting and one of the founders of what grew into the world’s foremost service organization. His is a story of an average man who was a player in a great beginning.

One of Loehr’s acquaintances was Paul Harris, a thirty-six-year old attorney who, like Loehr, had come from a small town. Born just to the north of Chicago in Racine, Wisconsin, Harris had later lived in Wallingford, Vermont as a youth and had earned his law degree from the University of Iowa. After considerable travel across the United States and through Europe, Harris finally settled in Chicago and built a successful practice.

It is Harris who gives us one of the most detailed descriptions of Loehr’s character; that of a bright and well-spoken, yet emotional and high-strung, individual.

His personality challenged attention. His was a rare combination, the good in him easily outweighing the bad. He was a stormy petrel, vehement, impetuous, imperative, domineering in one breath; then calm, docile, and lovable in the next. He was always thought-compelling; his words were spoken with lightning-like rapidity, and with such force that men frequently stopped in the street to look at him. His educational advantages had been limited, but his English was classical. Where he found the vocabulary with which to give his furious thoughts expression, was a quandary.

Another account of Loehr’s personality offers a similar portrait, although with humane ideals.

Loehr was temperamental and volatile. One moment he could be talking vehemently and gesticulating wildly. Within seconds the mood would pass and he would become gentle as a lamb. Loehr was generous almost to a fault. He would cheerfully give his last cent to help a friend, and no one was too lowly to be the recipient of his sympathy (including) elevator operators, janitors, and cleaners. He was, without doubt, a man of character.

While Loehr’s business interests brought him in contact with many people, close friendships were hard to come by in the swirl of humanity that was the city of Chicago. Harris had the same problem; he knew many people, but he had few close friends. Accustomed to the relationships of small towns, Harris took long walks through city parks and attended church services of all denominations, but found it difficult to form close ties to others. He had met many people in his profession, and that led Harris to wonder; why could not his business friends also be his social friends?

Loehr could not have known it at the time, but, in his office, he had hosted the first-ever Rotary meeting. From that informal gathering of the “first four” on that freezing night in February, the organization known as Rotary would grow into a membership of over 1.2 million members in over 31,000 clubs in over 160 countries. Although community service was not discussed in those early meetings, Rotary later evolved into one of the world’s great service organizations, with countless projects to its credit. Its seeds were planted in his Room 711 of the Unity Building; Gustave Loehr was an original Rotarian.

But Loehr would not enjoy the growth of Rotary. He was present at the third meeting, but there is no record of him at subsequent gatherings. Harris writes that Loehr resigned due to “the feverish ups and downs of business,” which Walsh describes as “volatile as his personality.” Indeed, it appears that Loehr’s vocation as a mining engineer was not a solid one. It would not be the last time that Gus’ roller-coaster business affairs would cost him.

In the annals of the organization, it appears that Loehr attended but three meetings—the first three Rotary meetings ever. But his place in Rotary is indisputable; he hosted the first meeting and was one of the “first four” Rotarians in the club’s illustrious history.

After six meetings, the Chicago Rotary Club discontinued its practice of meeting in members’ offices and began to assemble in various restaurants and hotels. More and more businessmen flocked to the club, and by 1908, a second club was founded in San Francisco. From there, the drive to organize led to Oakland, then to Seattle, Los Angeles, New York, and Washington. Then Rotary went across the borders, to Ireland, England, and Canada; within a few years, clubs were established in Asia, South and Central America, and elsewhere in Europe. By 1912, there were fifty clubs with 5,000 total members worldwide. Only two years later—and only nine years after that first meeting at the Unity—the 100th Rotary Club was founded in Phoenix. Indeed, these were great years for the burgeoning Rotary movement in America and around the world.

Upon his death on May 23, 1918, Gustave Loehr received very little recognition for his role in the organization of Rotary. Neither of his obituaries in the two newspapers of his hometown of Carlinville, Illinois mentioned Rotary, nor did death notices in the nearby Gillespie and Springfield papers. In addition, the tiny notice of Loehr’s death in the Chicago Tribune did not include his involvement in the club.

By comparison, Harris, the generating force behind Rotary’s explosive growth and collective respect, became a sort of international celebrity whose memory is cherished by Rotarians even today. Harris, who authored three books on the history of Rotary before his death on January 27, 1947, is buried in Mount Hope Cemetery in Blue Island, south of Chicago. Sylvester Schiele, also a lifetime Rotarian, lies near Harris’ grave; both men and their families continued a close relationship throughout their lives. Local members of Rotary maintain a beautiful monument and walking path at Mount Hope to honor the memories of these cherished Rotarians. By contrast, Loehr’s grave in Carlinville is nondescript; the gray headstone, which matches those of his parents and three siblings in the family plot, simply reads “Gustave H. Loehr 1864-1918.”

Should Loehr hold a valued place in Rotary? He attended only three meetings, the first three in club history. Even his friend Paul Harris, sympathetic to Loehr in other writings, bluntly declared in his 1948 My Road to Rotary that Loehr “failed to follow through.” There is little doubt that Loehr’s brief membership is the principal reason that his life, and his role in the formation of Rotary, have often been overlooked. In addition, while Harris and others remember Loehr’s fine qualities, there is little else in his life, professionally or personally, that distinguishes him. One might argue that Loehr simply had the good fortune to have a friend like Harris, the good timing to host the first meeting, and the good sense to recognize a great idea.

But to gloss over Loehr is to miss a crucial part of the history of Rotary International. Many figures in history have been fortunate, or otherwise, to be a part of a seemingly simple event that later changes the world. Loehr—or any of the other three men that night at the Unity—could not have possibly seen the future of what they were creating. But what was to come was indeed spectacular, as the millions of past and present Rotarians, and the billions of people and the numerous causes they have helped, will tell you.

To overlook any aspect of history is an injustice. It is only proper to remember Loehr for his role in a visionary idea whose roots came from a meeting in his cramped Chicago office on a cold February night a century ago. That Rotarians today honor Loehr is a deserving credit for the part this “original Rotarian” played in the creation of an idea that, in many ways, helped shape the world we know today.