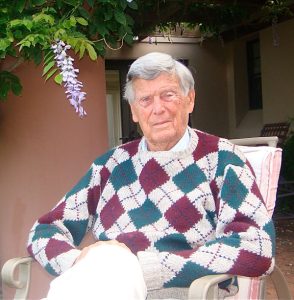 Richards P. Lyon was not born with a silver spoon in his mouth. It was more likely a Rotary Wheel merging with the Boy Scout Oath and Laws. His boyhood was not unusual for an American boy of that time with the privilege of loving forceful parents, weathering the Crash of 29, who taught that you live one day at a time, with the goal of being “effective” each of those days.

He and his brother, at 19 and 17, circled the world, to ride bicycles 3000 miles through Europe. Rotary and its founder Paul Harris made possible bastions of support in a world that connected only by telegraph. Basketball (see photo below) with the man who changed the game, Hank Luisetti, and an engineering degree from Stanford led to his instant decision to become a doctor so he could be helpful each day, a decision never regretted.

As a engineer-physician, Richards found himself a problem discoverer, then solver, using engineering principles for humanitarian needs. The snug stocking worn today to prevent emboli was his first contribution. The in-bed scale to control fluid-balance in the very sick, was the next, to be followed by a series of problems revealed in the field as he helped to pioneer the wonders of pediatric urology. 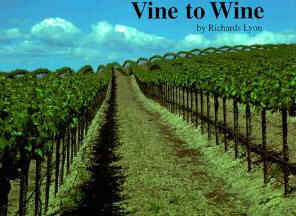 On retirement at 67, really too early as he looks back, he found himself in the vineyards of Napa, photographing the beauty of vines and workers, all resulting, at wife Carol’s behest, in Vine to Wine the book Vine to Wine, now a classic. 1000 Napa County Roadside Wildflowers then followed as he satisfied a lifetime desire to proclaim their beauty while continuing his desire to be useful and effective each day. A lifetime with camera always at hand, was the critical part of this program, as he made his own exhibits for the AUA in the midst of a busy life as urologist and renal physiologist, there speeding the understanding of fluid-electrolyte balance while making it practical with body weight control.

The computer was a natural for his roving mind, and lead to mentoring in many countries, most heavily in Pakistan, where as a pediatric-surgeon-professor, he has become equally prepared to practice pediatric urology in a world crying for help and where congenital deformities can receive little concern or care.

This unquenchable curious mind, between 85 and 94, has solved, and with simplicity, the problem of lane-changing on the highway, not dependent on complex electronics, yet still more effective.

His story A Process Mind, recently in print, attempts to encourage parents to recognize the creative potentials in minds like his – slower, unable often to attain “straight A” status as he struggles to understand “The Process,” which requires recognizing the Real problem, Solving it, being Effective, and Doing It Now.