There are several possible founders of the Rotary Clubs in Vienna, Prague and Budapest, but one name and one club appears in every account .

These names are Frank Molloy and the Doncaster Rotary Club from England.

In the records for Vienna, Molloy is called the ‘Grundungsbeauftrager’ (foundation agent) and the Doncaster Club the ‘Patenclub’. (father club) 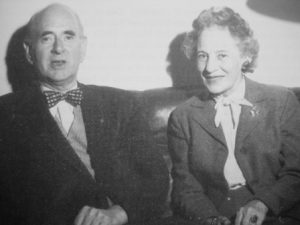 It was recorded in the club’s annals that Molloy (seen here with his wife) “had been selected by Headquarters to pay a visit to the Continent and to inaugurate the Rotary Clubs of Budapest and Vienna. It is not clear whether the headquarters was of RI or RIBI.

The charter was presented to Vienna on October 19, 1925 by RI Commissioner Willem de Cock Buning.
Besides Molloy, there were 2 other Doncaster members as well as members from Barnsley and Rotherham.

A year later, another group led by Molloy toured Europe visiting the same three clubs and establishing youth exchange and other joint activities. When Paul Harris attended a major rally of Rotarians in 1928, Dr Hyka a Vice President of the Prague Club was among those who came to meet him.

The Doncaster Club about the same time presented all three clubs with Presidents’ Chairs and Vienna and Prague with
Presidents Jewels. 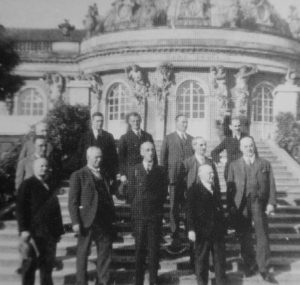 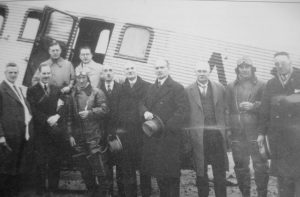 These two photos, above left and right, by courtesy of the Doncaster Rotary Club, show a party of South Yorkshire Rotarians on a visit to Eastern Europe in front of the Sans Souci Palace at Potsdam near Berlin, and with their pilot in front of the airliner (Junkers 52?) which took them on their visits to Berlin, Vienna, Budapest and Prague. Molloy will be there but we are not sure which he is!! Help gratefully received.

Edited by Basil Lewis, UK, from ‘The Beginning’ the 75th anniversary booklet of the Doncaster RC put together in 1996 by club archivist, Ken Emmott.