This photo (below) has personal significance for me. 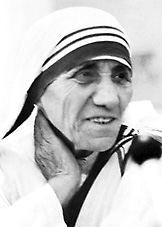 I had the honour of being her liaison escort throughout her 5 day visit to the Philippines.
During casual conversation with Mother Teresa and RI Pres Canseco, I mentioned my wife was expecting our fourth child and after three daughters, it was our hope that the fourth would be a boy.

They both asked to see her and during the visit Mother Teresa pinned a special holy medal on my wife, (she wore that medal for the remainder of her life).

Pres Canseco, a noted Mexican specialist, checked my wife and told me that the the child was very healthy and that all would be well and the chance of a son was good.

Good natured banter ensued between us four and the outcome was an agreement that if the child was a son then the name ‘Patrick’ would be part of his name; if a daughter should come along then ‘Teresa’ would be one of her names.

Thomas Patrick John Shanahan came along bright and bubbly and carries the name TJ to this day.

In 1986 during the Papal visit to Australia, the Papal entourage was accommodated at the Diplomat International Hotel in Canberra with me as the General Manager at the time.

A surprise visit of the Pope during the very early morning of the last day of his tour, found myself, with my son TJ, in the foyer of the Hotel when his car and escort pulled up unannounced in the Hotels front driveway entrance.

Ushering him into the Hotel I was able to offer him a cup of tea and sat with him while he waited for his senior clergy that was accommodated at the Hotel, to wake and prepare.

Having very little in common outside of being a practising Catholic, I mentioned the meeting with Mother Teresa and the Pope then blessed us both and was pleased with the simple story I had related to him.

His closing remark was that ‘We do good work, don’t we’ as he patted the head of my son.

I sincerely regret not having a photo of this meeting with such an important person but the memory I have is truly wonderful.

I hope this is read with the feelings I have as I humbly reflect on it; to my friends…
The photo attached is the only one of it kind I have ever seen although I sure there would be others 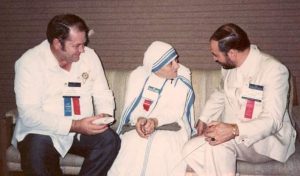 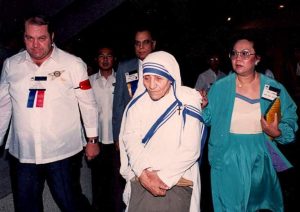 Mother TeresaMother Teresa was born Agnes Gonxha Bojaxhiu in Skopje*, Macedonia, on August 26**, 1910. Her family was of Albanian descent. At the age of twelve, she felt strongly the call of God. She knew she had to be a missionary to spread the love of Christ. At the age of eighteen she left her parental home in Skopje and joined the Sisters of Loreto, an Irish community of nuns with missions in India. After a few months’ training in Dublin she was sent to India, where on May 24, 1931, she took her initial vows as a nun. From 1931 to 1948 Mother Teresa taught at St. Mary’s High School in Calcutta, but the suffering and poverty she glimpsed outside the convent walls made such a deep impression on her that in 1948 she received permission from her superiors to leave the convent school and devote herself to working among the poorest of the poor in the slums of Calcutta. Although she had no funds, she depended on Divine Providence, and started an open-air school for slum children. Soon she was joined by voluntary helpers, and financial support was also forthcoming. This made it possible for her to extend the scope of her work.

On October 7, 1950, Mother Teresa received permission from the Holy See to start her own order, “The Missionaries of Charity”, whose primary task was to love and care for those persons nobody was prepared to look after. In 1965 the Society became an International Religious Family by a decree of Pope Paul VI.

The Society of Missionaries has spread all over the world, including the former Soviet Union and Eastern European countries. They provide effective help to the poorest of the poor in a number of countries in Asia, Africa, and Latin America, and they undertake relief work in the wake of natural catastrophes such as floods, epidemics, and famine, and for refugees. The order also has houses in North America, Europe and Australia, where they take care of the shut-ins, alcoholics, homeless, and AIDS sufferers.

Mother Teresa’s work has been recognised and acclaimed throughout the world and she has received a number of awards and distinctions, including the Pope John XXIII Peace Prize (1971) and the Nehru Prize for her promotion of international peace and understanding (1972). She also received the Balzan Prize (1979) and the Templeton and Magsaysay awards.

This autobiography/biography was first published in the book series Les Prix Nobel. It was later edited and republished in Nobel Lectures. To cite this document, always state the source as shown above.