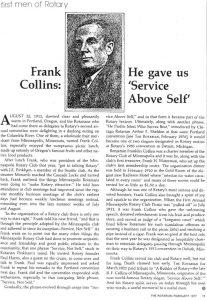 From an article in The Rotarian February 1977

This Minneapolis, Minnesota Rotarian spoke at the 1911 Portland convention. It was Rotary’s second convention with Paul Harris in his second term as president of the National Association of Rotary Clubs. After meeting Harris, he was asked to address the convention and one phrase of his talk stuck: “Service, Not Self.” This became Rotary’s motto: “Service Above Self” as adopted at the 1950 convention.

There is a reference to “Service above Self” at the following Basil Lewis Article
Courtesy of the Rotary International Archives Department.