The fifth Rotarian and the first singer 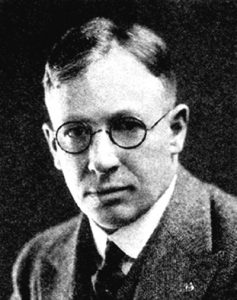 Look around your Rotary club and think about what Harry Ruggles started.

Being the “printer” he created the first printed emblem. Since they called themselves “Rotary,” Harry used a wagon wheel with “Rotary Club” above it.

But Harry Ruggles’ single great contribution had nothing to do with his trade. Here is what really happened when “Rotary started to sing!”

Then, in 2002, Doug Rudman of the Rotary Global History research team with sources including Sue Davis, granddaughter of Harry Ruggles, the diaries of PRID Joe Calder, 1928-29 (via PRIP Wilf Wilkerson), “The ABCs of Rotary,” PRIP Cliff Dochterman 1992-93 and Oren Arnold’s “The Golden Strand,” 1966, copyright ROTARY/One, page 97, prepared the following article.

An article, published in a 1978 Rotarian Magazine and Paul Harris’ own comments from his story/textbook of Rotary “This Rotarian Age” follow this article.

From “The Golden Strand,” Rotary Club of Chicago’s look at the first 61 years of their club, this much is certain: Harry Ruggles was at the second meeting of Rotary and Paul Harris had suggested him as the “printer” for the new organization. The sixth meeting took place at Harry’s printing shop.

Ruggles was one of only two people Harris says he discussed his idea with from 1900 to 1905. 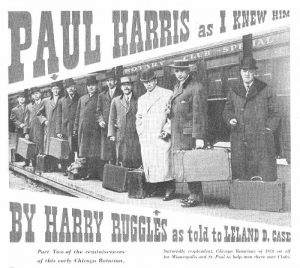 In March of 1952, seven years before his own death, Harry Ruggles, the Fifth Rotarian, and now, the last of the five, wrote a long, and insightful article for The Rotarian Sue Davis about his friend and fellow Rotarian Paul Harris.

How Singing came to Rotary, and Off-Color Jokes did not! Almost everyone who is a member of a Rotary club for more than a year knows that Rotary member No. 5, Chicago printer Harry Ruggles, brought singing to Rotary meetings. What almost no one knows is why, and most don’t know how important it was to
the life of Rotary.

Harry Ruggles was a very moral man. He detested off-color language, malicious innuendo and classless humor. He argued in club meetings for clean language. Little more than a year after Rotary had been formed, at an evening meeting in 1906, the guest speaker began a story. Having heard it before, Harry also had heard the off-color ending, and felt it was inappropriate for the club, so he jumped up in the middle of the joke and yelled, “Come on boys, let’s sing!” He then led the club in the singing of “Let Me Call You Sweetheart.”

This was not only the first time that members had ever sung in Rotary, but apparently, also the first time that a group of businessmen ever sang at a business meeting, anywhere. By his surprising actions at this evening meeting, Harry demonstrated that demeaning activities and off-color stories were not welcome at Rotary gatherings. “It was reported at the time that the would-be speaker was embarrassed and sore,” and so Harry Ruggles apologized, but the club backed him up. Right then and there, it was decided that all subsequent Rotary meetings should be conducted so that any woman could attend without being embarrassed. This has been the unwritten rule ever since, just as the tradition of singing has endured.

Dirty words were not the only controversy in the early days of Rotary. Oren Arnold, in The Golden Strand, revealed, “The time came, repeatedly, when Paul Harris was faced with failure; for one reason or another — or for no real reason — the club often was at the point of disbanding. On such critical occasions Harry stepped up front and shouted, ‘Come on, fellows, let’s sing!’

Was it the magic of Harry Ruggles and his music that worked? Was it his infectious enthusiasm for singing? Or, just maybe, some of the reasons for its use had more to do with easing barriers between men, and ending acrimonious discussions than a need for choral music.

History has proven that it was, and is, good magic for clubs anywhere, for families anywhere, for groups of people anywhere. Arnold continues, “After all, clubs are simply families; when they move in divergent paths, group singing often is the best way to reassemble them. Harry Ruggles knew that, hence the parent unit and the whole service club movement is indebted to him.” 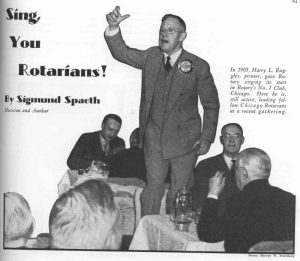 From The Rotarian June 1938, Harry Ruggles is still standing on a chair and “singing.”