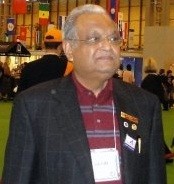 An interest in Rotary began as a teenager when he attended several Rotary Fellowship Meets, which took place at home. After joining business in the early sixties, he accompanied his grandfather and attended several Rotary weekly Tuesday meetings at Princes – Grand Hotel. His home had offered home hospitality to several foreign & Indian Rotarians.

Returning again to Kolkata in the early 80s, he hoped to join his Grandfather’s Club – RC Calcutta known in India as “Rotary number 1” but his classification as “plywood manufacturer” was unavailable.

He was invited to join the Rotary Club of Central Calcutta (RCCC) by President Mahesh Saharia in 1986 who had invited him to a Rotary Polio program at Kala Kunj, Kolkata. Mahesh left RCCC but in 1987, Girish Khaitan renewed the invitation while Raju Rajgharia was the President.

Upon joining Rotary, his aim was to help develop rural West Bengal. However, when he was called to lead RCCC after PE Ramesh Bahety developed cold feet and decided to resign from the Board, his aim was delayed.
1989 – 90 was a period of turmoil in RCCC. His first task was “to bring back sanity & decorum in the Club!!”
As 1990-91 President he was successful and paved a way for the future leaders to SERVE through RCCC.
During his presidency he developed three very good friends in Rtn K.Chandramohan (Mohan) a grass-roots, service oriented Rotarian; Rtn Prabhat Rohatgi, then President of Rotary No.1, a family friend; and RCCC President Elect Rtn Shekhar Mehta.

He relates his most memorable program as president of RCCC as being the “International Inter District Preserve Planet Earth Seminar”, at the Kolkata Ice Skating Rink.
“We had a very big contingent, Rotarians with their families from Bangladesh and the participation of Interact, Rotaract and Rotarians was unexpected & over whelming.

While attending a LIMB Camp at Birlapur jointly organized by RCCC and RC Budge Budge in December 1991, Mohan requested Binod, Raju and Shekhar to consider sponsoring a Rotary Club at Baghati, Hooghly where a visit to the village had been planned.
Raju and many other RCC Leaders realised that the village could only be accessed after a walk of two kilometers on a narrow path and doubt of the ability to form the club arose.
Binod however, accepted the challenge. The village lacked rudimentary facilities such as proper road access, clean tube well drinking water, toilets, school etc. There were hardly any fruit trees and people sustained themselves with a single Khariff paddy crop, which many a time was washed away due to excess rain.

Within one year of entering the village in May 1994, four tube wells were installed for safe drinking water and toilets were constructed after educating the villagers.

RCCC ventured to start another two Rotary Clubs – Dakshindihi & Bhanderhati in Hooghly where similar developmental activities and projects were taken up at these clubs with addition financial support through TRF Matching Grants.

While President, Binod had dreamt of creating ROTARY SIKHSHA KENDRA (RSK) in his own Club’s School building.
The project was started in a hired room at Vishnupur by Raju. However, the president of the club, for want of funds, intended to abandon the project. Rtn Binod arranged funding and kept the project going.
Subsequently, land was located and RCCC Planned a Lottery to raise about Rs Nine Lakhs (Rs900,500). The Lottery, took place in 1991-92 when Shekhar was President and Rs600,500 was raised.
The land which had been offered at a very low cost, went into difficulty – the West Bengal Govt issued acquisition orders for widening Diamond Harbour Road. This was ultimately sorted out and thanks to Subhahsh Kankaria & his son Sandeep, the school building was a reality within a few months of it’s foundation being laid by RI President Robert Bath.
RSK remains the flag ship project of RCCC!

During the year 1994-95, Rtn Binod took the opportunity to spread amongst Clubs & Rotarians the Grant Programs of TRF.
As Dist Chair TRF Grants he learnt about the 3H Grant and the possibilities of bigger projects.
RCCC had contributed a substantial sum for the purchase of land for the District Hospital Project – EASTERN INDIA ROTARY WELFARE TRUST (EIRWT) and had committed to set up a M & CH Center in a portion of the 3 Acre plot at Salt Lake Sector V, that had been allotted to the Trust by the Govt. of West Bengal.
Despite some pessimism among several Trustees and with encouragement from Mohan & Prabhat, he convinced PDG Amiya Shankar Gupta to apply for a TRF 3H Grant for a Diabetic Hospital. With further encouragement, guidance and help from PDG (Kitchluda) Iftekharul Alam of RID 3280, RCCC found an International Partner – RID 6380 via the then District Governor – Terry Youlton. Youlton was very interested in joining hands, as his daughter died due to diabetes.
It was an unforgettable experience at the Foundation Laying ceremony of the Hospital and regular visits to the site during construction. Several meetings & functions were organized for fund raising. Thanks to the first cheque from PP Dr R S Majumdar, the EIRWT was able to generate funds for the foundation & ground floor of the first building. The foundation & the ground floor of 9,000 sq.ft. estimated to cost about one crore (Rs10 million) was completed and the hospital equipped through the TRF 3H grant was started as a Diagnostic Center.
RCCC contributed another Rs 18 lakhs (Rs1.8 million) for the floor area to accommodate the Pathology Lab. The Hospital started it’s activities from January 2001. Later the same year EIRWT joined hand with Asia Heart Foundation (AHF) to manage the Hospital. In 2003 a tripartite agreement was signed with EIRWT, AHF & Shankra Nethralya. The hospital was converted into a ‘State of Art’ Eye Hospital – “Rotary Narayan Sankara Nethralaya”. 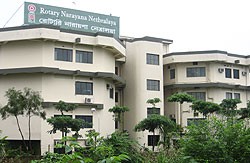 The hospital grew. Three more floors were added through donations collected by AHF. The Hospital has a covered area of 40,000 sft. Unfortunately, the agreement was determined and thus EIRWT decided to enter into another very favorable agreement with AHF. The Name of the Hospital now is “ROTARY NARAYAN NETHRALAYA”. Rtn Binod reflects that “to visit the Hospital, the only permanent project of RID 3291, makes me feel really very proud to be a ROTARIAN of RID 3291!” 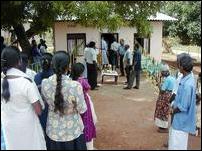 Experience as District Secretary –
“With Prabhat leading the District, we were able to involve most of the Clubs into TRF Grant Projects with over 120 TRF Matching Grant Projects.
The saga of TRF Projects continued the following year under the dynamic leadership of Shekhar. The final nod of the TRF for the biggest ever 3H Grant – US$ 530,000 saw Shekhar’s dream ROTARY NAGAR Project come true.
It was indeed a very sentimental and satisfying occasion to receive a call at 12.15 in the night, from our International Contact Person and a great friend PDG Ton Ewen of RID 7010 Canada.

Binod acknowledged Ravi Sehgal who in 2001-02 appointed him as DICO – District Internet Communication Officer & Webmaster. “Rotary gave me this opportunity to learn Computers & Websites, which has come to very good stead in day to day life.”

“The challenge of introducing ROTARY LEADERSHIP INSTITUTE (RLI) during 2002-03 by Governor Amitava Mookerjee, gave me a fresh insight to face the mirth and mocking of several Past Governors. RLI today is in 31 Districts of Rotary South Asia Zone. What a wonderful program to convert RINOs – Rotarians in Name Only into knowledgeable Rotarians who appreciate the meaning of Rotary FELLOWSHIP & SERVICE towards fulfilling RI’s aim of a World with UNDERSTANDING, GOODWILL & PEACE.”

“The TSUNAMI disaster on 26th December 2004, gave me an unforgettable opportunity and experience of true Rotary SERVICE. An SMS from Shekhar set the ball rolling of collecting, sorting out, packing, transporting and distributing relief material to those who lost everything and even their close dear ones at Andaman & Nicobar Islands.

The traumatic scenes at Port Blair gave me another angle of real service and it’s meaning. The sense of satisfaction of being able to be of help & use in such trying conditions. The several visits to Port Blair and to be a part of REHABILITATION activity gave more satisfaction unfounded. Unexpected contributions flowed both locally & world over.
Our efforts made it possible to build 500 Low Cost Shelters at Little Andaman, Two Children’s Hostels and a Medical Center with latest diagnostic facilities & telemedicine at Port Blair.

My contact with a great friend – PP Samar Das of RC Guildford RID 1250 has become a commitment to Rotary’s Preventable Blindness Projects. 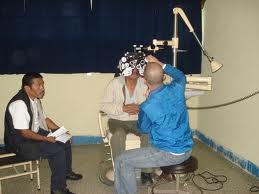 The most satisfying project, with which I am still closely connected, is the “Rotary Hooghly Eye Hospital”. I am proud to be a part of RID 3291 efforts, which now has seven (7) Rotary Eye Hospitals and several other Eye Hospitals where equipment was provided through TRF M/G Projects.
It was District 3290’s Centennial aim to achieve 10,000 Intra Ocular Lens Implant surgeries to give LIGHT to those who unfortunately suffer.
However, I am happy that currently the Rotary Hospitals give LIGHT to over 15,000 people every year and the target is to achieve 50,000 IOLs!

Experiences & memories in organizing several Rotary District and Zone events have given me a lot of Rotary insight, lasting wonderful memories and friends, whom I cherish & preserve.
These events have been hard work but a saga of frustrating satisfaction to be a Rotarian.

The experience of hosting Rotarians form various parts of the earth & GSE Teams at HOME is a fantastic way to make lasting International friends the world over. Though it can be a time consuming effort, but pays great dividends towards making life long friends and insight & knowledge of people, values, culture & religions around the world.

Binod attended Rotary Conventions held at Singapore, San Antonio, Chicago, Copenhagen & Birmingham. He reflected “I look forward to attend the Convention at New Orleans. The true INTERNATIONALITY OF ROTARY can only be appreciated, understood, seen and believed by attending a Convention.
Having integrated these travels with opportunities to visit Clubs around the world and HOME STAYs with my several International Rotarian friends has made me a different human being with tolerance and appreciation of different living, values, culture & thoughts.
In addition, it would NOT have been possible for Chandrakala & myself to see so much of this beautiful planet earth if it was NOT for Rotary!”

Rotarian Binod Khaitan quotes William Arthur Ward – “Real optimism is aware of problems but recognizes solutions; knows about difficulties but believes they can be overcome; sees the negatives, but accentuates the positives; is exposed to the worst but expects the best; has reason to complain, but chooses to smile.”

SUMMARY
►Past President of Rotary Club of Central Calcutta;
►District Secretary – Projects & Program for Rotary Years 1998/99 & Millennium Year 1999/00.
►DGSC in the 2011/12 year & was so also in 2003/04 and 2005/06;
►Trustee Secretary of The Eastern India Rotary Welfare Trust;
►Known for his work in the rural Villages of Hooghly District through RI’s Program – Rotary Community Corps.
►Since 2002/03 involved in the Rotary Leadership Institute in South Asia;
►Vice Chairman of the Rotary Leadership Institute (South Asia Region) since 2006/07.
►His wife, Ann Chandrakala & Binod are Major Donors level II;
►Both are members of the Bequest Society.
►All his family members including grand children are PHFs and his son Sakate is a Rotary Foundation Benefactor.
►Recipient of TRF’s Distinguished Service Award;
►Recipient of TRF’s Meritorious Service Award;
►A philanthropist, and is associated with several Charitable Trusts and Organizations;
►A keen Golfer who has represented his country;
►The first National Junior Golf Champion;
►Chief Referee during the Indian open Golf Championships held at the Royal Calcutta Golf Club;
►Has attended six RI Conventions;
►The first Patron of the 4 Way Test Association in India;
►The first member of RGHF in Asia, representative for Zone 6a which covers 7 Rotary Districts in northern India and Nepal.;
►An RGHF Hero