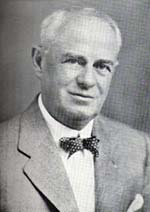 ​In 1916, Percival Herbert Coates, an Englishman working for a British owned railway, was a permanent resident in Montevideo, Uruguay. That year he went to the Methodist General Conference in Chicago where he was a guest at one of the weekly meetings of the Rotary Club of Chicago. An American lawyer, Richard Momsen, who was serving as U.S. Consul General in Rio de Janeiro, also attended the same Rotary meeting. There they met the legendary Ches Perry, who served as secretary and organizer of the International Association of Rotary Clubs, today, known as Rotary International. Momsen and Coates were very enthusiastic about what they saw and what was said about Rotary
by Ches Perry. Returning to South America, they competed to see who would win the race to start the first club in their respective country

In 1918 Coates succeeded when Montevideo RC held its initial meeting to become the first club in South America. In Brazil , at the same time, Momsen met some friends to discuss his project. However they were not enthusiastic about the idea. Following two more unsuccessful attempts, Momsen was another 4 years before Rio de Janeiro was founded, and then it was with Coates’s help, using his experience from Uruguay. At this first meeting Coates attended as the representative of Rotary International.

Herbert Coates, known as Don Heriberto, was in1922 secretary of the Rotary Club of Montevideo, and also a member of the Committee for the Extension of Rotary. Subsequently, Coates remained the ‘eminence grise’ of South American Rotary and was there to entertain Paul and Jean Harris when they visited Montevideo in 1936. Harris wrote that “the presence of (Coates) amply justified our visit to South America’s first Rotary club. To relate the story of the untiring work of Don Heriberto in the interests of Rotary….would be to tell a long and romantic story. England has given the world hundreds of
great leaders. Not among the most conspicuous, but among the most purposeful and useful must be written the name of Herbert Coates. ”