The 2007/08 ‘International Directory’ once again is not only an invaluable aid to Rotary, but is also a fascinating document in its own right.

The Rotary alphabet is a little odd, the section marked ‘F’ being followed by ‘O’ and then ‘C’ and finally ‘L’. As usual, the section on Rotary licences is a good place to start and is well worth a good look, dealing with Rotary badged licence holders. Thus, a sporty Australian company offers ‘Golf ball cleaners’ and in Canada, one can buy ‘Green Keepers’ (but not ‘Professionals’) for golf but what are ‘panoplies’ in Brazil or ‘Comania’ from Japan? And how does one play ‘Nubble’ a CD game from Golders Green?

Do Rotaractors, one wonders go for ‘Boston Rockers’ and why are French coin purses available in Iowa? The Japanese almost inevitably produce ‘smile boxes’ while Grasse in France offers a ‘Rotary’ perfume. Some items from previous years have gone but India still sells Rotary scooters, Singapore has Teddy Bears and Japan offers Rotary badged hygrometers (?).

Section ‘O’ includes a list of the various Networking Groups (Fellowships), some of which are well-known, others surprising or obscure. The Doll Lovers Fellowship reflects, perhaps, Rotary’s new dual gender image, as does the Quilters and Fiber Artists Fellowship. And what do the members of the Poultry Fellowship do? But section ‘C’ is probably the most interesting.

This is the section which lists districts, governors and clubs. What sort of people become District Governors? Many are in legal or medical practices but way out West , the DG5300 is a ‘Saloon Keeper’ , while DG5630 is in ‘Ranching.’ Presumably he visits his clubs on horseback, but what does DG6490 a ‘Life Specialist’ do? Aren’t we all ‘life specialists’ in our own way? DG7600 is honest about his job; he is in ‘Wealth Management’ as are most Rotarians, except that we call it ‘making ends meet’. If you are stressed, go to DG5370 who offers ‘Bed and Breakfast’, and take up the quiet hobby of ‘Embroidery’ with DG7630. On second thought, perhaps a drink with DG6710 would be preferable as his job is to give ‘pub info’. Does he know the Wellington in Lund, a first rate pub?

It is surprising to find that there are clubs with no more that 4 or 6 members. Indeed, in D5260, there are 5 clubs, out of 35, with less than 10 members. One club, the Base Antarctica Esperanza, has its Secretary living locally but its President is miles away in Buenos Aires. All in all, this is a book which repays study and can be recommended to members for a good night’s browse…….and sleep. 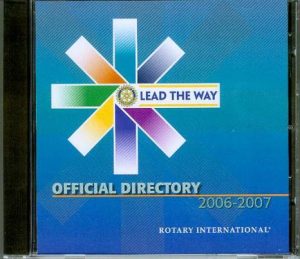 The 2006/07 Directory is a truly fascinating document and well worth the cost. It is divided into sections starting with ‘F’, followed by ‘C’ and then ‘O’. Section L at the end is especially interesting with its lists of currently licensed Rotary goodies. Banners and badges are obvious items but now, with dual gender clubs, one can buy badged ‘Lipstick holders’, (hopefully dispensing blue and yellow?) ‘Perfume dispensers’…..and ‘Sewing kits’. ‘Pocket secretaries’ sound fun; ours is 6 foot 2. Does Illinois, the home of Rotary, reflect the status of Rotarians by offering ‘Diamonds’ and are these Rotary badged? More realistically, as we aim to get our average age down, Singapore offers ‘Rotary Teddy Bears’ . Sporting Australia naturally has a company licensed to sell ‘Rugby tops’ while Canada can offer ‘Leather mini golf desk caddies’, and for our more senior members, ‘Rotary badged vitamin boxes’.

We have to look to Japan, however, for some of the odder items such as a ‘Rotary badged hygrometer’ and a ‘pedometer’. If one tires of testing the latter, at least one can rest on Linlithgow’s Public Bench or sitting in a ‘Rocking Chair’ from Maine, probably kept warm with Connecticut’s Polar fleece, and munching Rotary emblem chocolates from Mississippi. By the way, what are the Japanese Rotary badged ‘Cake Pick Cases’? Or New Jersey’s ‘Fanny packs’?

However, the main section ‘C’ lists districts, governors and clubs. What sort of people become District Governors? There are the customary lawyers, bankers and doctors but there are others. One might expect to find a rancher in Texas (5870) but what does a ‘Writer’…outdoor’ (5610) do? One hopes that DG 5030 hasn’t been chosen to do district work in his profession of ‘Disaster recovery’. At least DG 7390 is realistic in his job as ‘Not for profit….foundation’.

The list of clubs repays careful study too. A knowledge of geography and in some cases Latin is useful in identifying the location of clubs. Where would one place ‘The Channel’ Rotary Club, ..or Clausentium and Lindum? Luckily the latter two also include clues by adding the names Southampton and Lincoln, while the Paragon Club may be just that. Presumably climbing Rotarians are welcome at the Mount Everest Club in Nepal.

One of the fairly recent developments in club meetings has been the increase in breakfast gatherings. This has led to considerable and fascinating originality in names. Many have settled for a name that is ‘normal’ as well as explicit. The most common ones appear to be ‘Sunrise’ (Oakhurst and many others) and ‘Breakfast’ (Fort Collins et al). Surprisingly, ‘Morning’ (Los Gatos) is rarer as is ‘Sunup’ (Palm Springs).

But, some clubs have tried to be different, with the obvious but rare ‘Daybreak’ (Camrose) typical. Several British clubs have had recourse to a classical upbringing with ‘Matins’ (Reading) and ‘Aurora’ (Shepperton) among them. A.M. Eastbourne) is brief but self explanatory, but Owatonee’s ‘Early Edition’ is definitely a one-off as is Maidstone’s ‘Dawn Patrol’. And how about Big Bear Lake Dawn Busters? If you know more odd names, do let us know. www.historycomment.org