The Club was chartered in 1928 at a meeting held in the True Temper Building. The Wallingford, Vermont Club was the 50th Club in the 37th District. The Chairman for this meeting was John Fox of the Rutland, Vermont Club, who presented the speakers.

The first President of the Wallingford Club Dr. John Miller was the first to address the assembled group. President John was followed by Paul Harris’ cousin Herman Vaughan of Rutland, one of the principal organizers of the club. Past District Governor Jim Dewey offered some words of advice to the group. John E. Weeks of Middlebury, Governor of the State of Vermont, who was a Past District Governor of the 37th District. Paul Harris delivered the charter address to the more than 400 Rotarians in attendance. Immediate Past District Governor of the 37th District Rev. Anthony Parshley had the task of following Paul Harris to the speaker’s platform. The sitting Governor of District 37 Ray Farwell gave a speech about the responsibilities of being a Rotarian. The final speaker for the night was Carl Hinsman, President of the Rutland Club who presented the Wallingford Club with a picture of Paul Harris to hang on the wall of their meeting place.

Paul Harris returned to Wallingford, Vermont in 1933 to attend a ceremony for the dedication of the Rotary building.

By July of 1936 the Club had grown to twenty-four members and they were engaged in Community activities annually such as a Halloween celebration and a Community Christmas Tree.

On October 18, 1938 the Club celebrated their Tenth Anniversary at True Temper. There were 100 present consisting of Rotarians from Rutland, West Rutland, Ludlow, Manchester and Poultney. The special guests were two former members, W. H. Gallagher and George Richards. Herman Vaughan of the Rutland Club and Rev. E. Leroy Rice of Barre, Vermont, who was the District Governor, offered remarks prior to the guest speaker. The guest speaker was Rev. Anthony Parshley of Bristol, R. I., a former District Governor. His address explained the four objects of Rotary. During the evening the Club wired greetings to Paul Harris, to which he very graciously replied.

By July of 1944 the Club had twenty-nine members. The Club erected an Honor Roll in the center of town for the World War II Veterans.

Prior to October 13, 1947 the Wallingford Rotary Club held its winter meetings in the Congregational Church Parlor, the True Temper Inn, Old Stone Shop, or the Wallingford School.

The Wallingford Rotary Club held its first annual Auction in August of 1950, a tradition that was to carry on for more than fifty years.

The Wallingford Rotary Club held its 25th Anniversary celebration on Monday October 19, 1953 at the Wallingford Masonic Temple. Present were Rotarians from the District, Club, and guests. The speaker for the evening was Past District Governor Guy M. Catlin.

In 1958 the 1st District Governor Changing of the Gavel was held as an Inaugural Party, which was co-hosted by the Wallingford Rotary and West Rutland Rotary.

1962 was a very busy year for the Wallingford Rotary Club, as it also was the start of the Home-stay Program and International Dinner for Governor Nominees on their way to Lake Placid for their training. This exciting program lasted until 1975 when the Governor Nominee training had been relocated to Boca Rotan, Florida.

The Wallingford Rotary Club held a play in 1963 put on by the members of the club. This tradition continued until 1974 when Marge Tucker Miller was no longer able to direct the plays.

1963 was the year that the Club placed Town Crier Bulletin Boards in Danby, Wallingford, and Cuttingsville.

Monday May 30, 1966 was the day the Vermont Historical Site Marker was dedicated in a ceremony attended by Rotarians from the District and twelve District Governors-elect and their Rotary Anns from around the Rotary World. Governor of the State of Vermont and Rotarian Philip H. Hoff was the dedication speaker.

In 1968 the Club celebrated a three-fold anniversary in honoring the 100th anniversary of the birth of Paul Harris, the 150th year of the construction of the Memorial Building by his great-grandfather James Rustin, and the Club’s 40th Anniversary. To observe these events, the Club issued a commemorative coin, a dollar-size coin with a bust of Paul Harris on the face and a drawing of the Memorial Building on the reverse.
The bust of Paul P. Harris was done by sculptor Phil Kraezkowski, and each coin bears his signature. The Memorial Building was reproduced from a pen and ink sketch by Rotarian Gordon White of Morrisville, Pennsylvania and Wallingford, Vermont. The coins were struck by the Robbins Company of Attleboro, Massachusetts. The medals were serial numbered and were issued in silver and bronze. One bronze and one silver coin were given to the Paul Harris Memorial Room in Evanston, Illinois. An anniversary celebration was held on Saturday July 27th at the Rotary Building attended by members of Wallingford Rotary, Rutland Rotary Wallingford’s sponsor, and Fitchburg, Massachusetts Rotary sponsor of the Rutland, Vermont Club.

The Wallingford Rotary Club started the Arion Music award for the outstanding music student in the Senior Class in 1972.

On July 22, 1978 the Wallingford Rotary Club celebrated 50 years of service with an anniversary banquet at the Paul P. Harris Memorial Building. Bruce McMahon was the Master of Ceremonies introducing the Rutland Rotary Club, the sponsor club for Wallingford, with congratulations. District Governor Bob Shaw then presented Wallingford Rotary Club President Malcolm Hanbury with the certificate for 50 years. The film of Paul Harris visiting Wallingford for the dedication ceremony for the building was shown.

In 1982 President of Rotary International Hiroji Mukasa and his wife Kiyoko visited Wallingford, Vermont to do the Paul Harris tour and inspect the building. After a Lawn Party at the Rotary Building a District Banquet was held at the Cortina Inn with Wallingford Rotary Club President Russ Lattuca presiding.

In 1983 the Rotary building’s roof needed replacing. The old roof and underlying structure were removed and completely replaced, with the original slate being reused. To help with the funding the original square nails were saved, gold plated, and made into tie tacks. Some of the soil from the building was placed in glass vials and attached to plaques specially made to fund the reconstruction.

1987 was to be the year women gain the right to join Rotary. 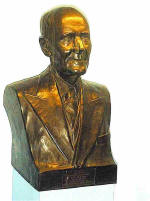 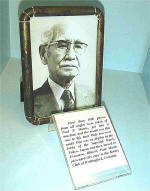 On October 1, 1990 sculptor Kimihiko Morioka, the son of sculptor Isao Morioka, visited the Walling ford Rotary Club. He presented club president David Lambert with a small bust of Paul Harris, which he had made in honor of his father. His father Isao was the sculptor of the original two Bronze Busts of Paul P. Harris, one of which is located in Wallingford, Vermont, the other at Rotary International in Evanston, Illinois. Kimihiko presented all of the club members with medallions of the Paul P. Harris. In 1993 Past President of Rotary International Hugh Archer visited Wallingford, Vermont to inspect the building following completion of the reconstruction. During his visit he was the Speaker at the 36th Annual District Governor’s Inaugural Party held June 28, 1993.

In 1997 President of Rotary International Luis Giay and his wife Celia visited the Wallingford, Vermont Club. A District dinner was held at Killington on Saturday night. On Sunday the Wallingford Club held a luncheon with Wallingford Rotary Club President Ann Lattuca presiding in the Rotary Building for Luis and Celia Giay, which was followed by a special tour of the Howard Harris home hosted by its current owners Jim and Sandy Marquis. January 27, 1997 was proclaimed ROTARY FOUNDER’S DAY in Vermont by Governor Howard Dean in honor of the visit. Director of Rotary International 1996-1998 Robert Coultas and Director elect 1998-2000 Abraham Gordon joined President Luis and Celia for this momentous occasion.

The Wallingford Rotary Club held an annual Halloween Costume Party from 1928 until 2002. In the early years acts were judged as well as costumes. For many years a parade was held from the True Temper parking lot to the school, where the costumes were judged and refreshments were served. A bonfire was held down at the ball fields for many years, which was enjoyed by young and old alike. 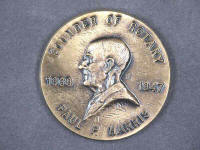 In 1968 the Wallingford Club in Vermont, celebrated a three-fold anniversary, honoring the 100th anniversary of the birth of Paul Harris, the 150th year of the construction of the Memorial Building by his great-grandfather James Rustin, and the Club’s 40th Anniversary. To observe these events, the Club issued a commemorative coin, a dollar-size coin with a bust of Paul Harris on the face and a drawing of the Memorial Building on the reverse. The bust of Paul P. Harris was done by sculptor Phil Kraezkowski, and each coin bears his signature. The Memorial Building was reproduced from a pen and ink sketch by Rotarian Gordon White of Morrisville, Pennsylvania and of Wallingford, Vermont. The coins were struck by the Robbins Company of Attleboro, Massachusetts. The medals were serial numbered and were issued in silver and bronze. One bronze and one silver coin were given to the Paul Harris Gallery.