Then and Now: Rotarians On The Move

The Seven Pillars of Rotary

Rotarians On The Move

How much of Rotary was formed by long discussions on very slow boats and trains?

Then and Now: Rotarians On The Move

Swiftly, swiftly flew the ship,
Yet she sailed softly too :
Sweetly, sweetly blew the breeze–
On me alone it blew.
– Samuel Taylor Coleridge
“The Rime of the Ancient Mariner.”

In this century of mass air travel, instant communication and lasting friendships made without any face-to-face contact, it is not easy to comprehend the difficulties that confronted our Rotary forebears in communicating with each other and in travelling to Conventions.

Messages were conveyed by mail which could take more than 30 days to travel from one hemisphere to their destination in the other. The fastest means of communication was by telegraph. No internet, nor cell phones, nor Blackberries in those simpler times. Of necessity, letters were precise in their meaning and carefully phrased, although, reading them today we view them as stilted in their construction and grammar. How, one wonders, will future generations, accustomed to text messaging, and whatever yet to be devised electronic devices, adequately communicate across language barriers.

Before the advent of mass air travel, intense cross-border security, lengthy queues at airline terminals and the convenience of the ubiquitous credit card; travellers cheques or letters of credit issued by banks were the means of accessing foreign currency. Travel was by steamship and railroad. Journeys from countries such as Australia and New Zealand to the West Coast of the United States took eighteen days and to Great Britain thirty-one at best. The cost in time and money to those dedicated Rotarians who made the odysseys to Conventions was not

inconsiderable as they were away from their businesses and professions for up to three months. It is documented that the British Rotarians attending the 1930 Convention in Chicago sailed from Southampton on June 7 and on arrival at New York then travelled to Chicago via Philadelphia and Washington, arriving in Chicago on June 22. Following the Convention they returned to Britain via Toronto and Montreal in Canada, eventually arriving in England on July 7. In many cases, those forays possibly constituted annual holidays, but they also were a valuable opportunity to establish friendships within the group as well as with Rotarians in other lands, thus establishing the firm bonds in Fellowship that is Rotary’s strength.

The protracted confinement aboard ships without sight of land for days on end, and in railway coaches provided the opportunity for serious discussion on matters Rotary. We may reasonably conclude that those discussions were the source of many of the decisions that were subsequently made by Rotary’s early Boards of Directors, decisions that were promulgated in clear and precise language which left little room for loose interpretation. An examination of old Manuals of Procedure shows them to resemble an Army general’s Order of the Day, issued before a battle; they provided only limited scope for interpretation by the District Governors as commanders in the field.

We should have sympathy and admiration for those hardy travellers of the past. They did not wear jeans, T-shirts, sports shoes and windbreakers. Suits, collars, ties, highly polished dress shoes, hats and overcoats were de rigueur. They knew nothing of soft fabric suitcases fitted with wheels and retractable handles. Their belongings were packed in stout, heavy rawhide suitcases and sometimes “cabin trunks,” large hinged boxes which stood on end and when opened out revealed drawers on one side and hanging space for garments on the other. In hotel rooms, guests’ shoes were put outside the door at night to be collected by a porter, cleaned and polished, then returned before guests awoke in the morning. 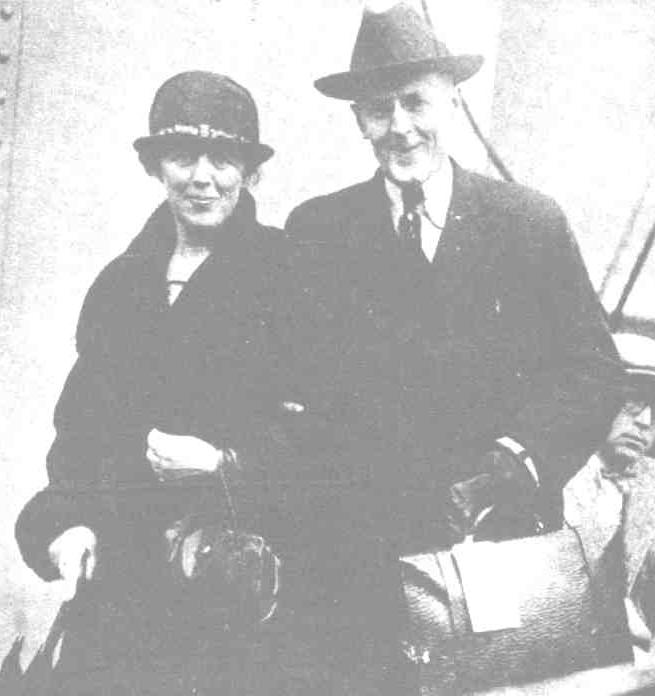 It was thus encumbered that Paul and Jean Thomson Harris made their many journeys about the world promoting Rotary and one can but marvel at the fortitude and commitment of that frail man and his devoted wife. It is little wonder that after Paul’s death and Jean had returned to her native Scotland, when invited to attend a Rotary function in Edinburgh, she declined, saying that she did not care to attend another Rotary meeting for the rest of her life.