The Rotary club of Traverse City

THE ROTARY CLUB OF TRAVERSE CITY 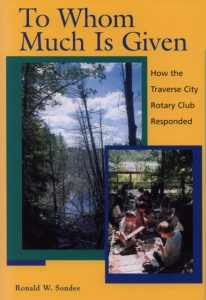 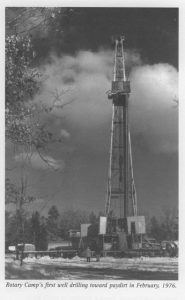 The Rotary Club of Traverse City, Michigan, was founded in 1920 and 3 years after its chartering, it set out to give service to its community by buying land for community camps, but nobody could foresee where this ‘good deed’ would lead. At an eventual total cost of $33,500, some 480 acres were bought for a camp site to be used in turn by 4-H, the Boy Scouts and the Girl Scouts . These were leased to the Scouts at a nominal charge of $1 per annum. In 1956 a further 393 acres were acquired.

There was nothing untoward to report until 1967 when evidence of oil and gas were discovered in the neighbourhood. A few years later in 1976, an oil well began production on one site and in 1979 a second well was opened up. Further wells were planned so that by 1981, because the club had reserved to themselves the mineral rights, over $1,650,000 of revenue had accrued. Finally, six wells were developed. 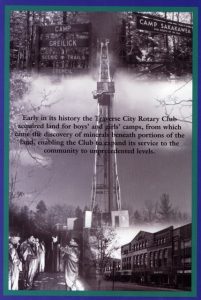 In 1977, it was decided that there should be two tax exempt organisations, one of which would hold title to the land, and the other would receive and administer the revenue. This latter, Rotary Charities of Traverse City, had over $40 million in its fund in 2000 and this money was and still is used to make generous donations to many local projects as well as to Rotary Foundation. For further details, readers should look at the website of the Rotary Charities of Traverse City, or read ‘To Whom Much Is Given’ by Ronald Sondee, a fascinating account of the Club’s activities from 1920-2000. A further account appeared in ‘The Rotarian’ in January 1981.