Bill Ballou at PETS in Denver

RGHF Member and PDG Bill Ballou recently represented Rotary Global History at High Country PETS in Denver, CO, USA. At that event he was presented with the Service above Self award from Rotary International. The story is below. PDG Bill is the second active RGHF member, along with PDG Eddie Blender, this year, to receive this honor. 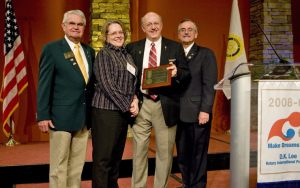 RID Don Mebus: “The RI Service Above Self Award is given to individual Rotarians who have rendered exemplary humanitarian Rotary service that embodies Rotary’s motto of Service Above Self The award recognizes outstanding efforts in the promotion of RI objectives in any Avenue of Service and is Rotary’s highest honor for a Rotarian. Only a maximum of 150 of these awards may be given each year out of the thousands of Rotarians who perform outstanding projects, give of their time and talent to make life better for others. This award is based on continuous service. Financial contributions are not relevant in the decision of this award. However, I might add parenthetically that most of the recipients are substantive foundation donors.

I am very honored this evening to recognize PDG Bill Ballou as a recipient of the Service Above Self Award. Bill, please come forward to accept this emblem of gratitude from Rotary International for your dedication to service above self

While he is coming forward, I might mention just a few activities that Bill has participated in.

He served as a GSE team leader to S. Korea and as the GSE committee chair in his district. He served as the quartermaster of Rotoplast for two missions in the Philippines, been a High Country PETS Board member, worked as a team member with the Children of the Dump project taking two tours to Nicaragua and served on the Hope and Relief International Foundation as a Board member for the Children of the Dump program. He also has been a delegate to the Council on Legislation as well as many other Rotary positions and responsibilities.

In addition to his Rotary Activities, he also organized and promoted a mission venture to an impoverished area of Venezuela, went to Nigeria on four occasions to to organize and develop funds for a water well project there, has worked extensively with Habitat for Humanity in Kearney, Nebraska as well as a Jimmy Carter Work Project in South Dakota and Kentucky, participated in fact finding site visits in Haiti to develop Water for Life program and many other projects with Church and Community.

He has received other awards for his interest in helping other people, and he is quoted as saying that he is happiest when h&s helping those less fortunate, and a fellow Rotarian Sharon Hoffman said that “He spends more time helping other people than what he does for himself”

It is no wonder that he has been selected to receive this prestigious award, and I am very honored on behalf of the RI Board of Directors and RI President Wilf Wilkinson to present the Service Above Self Award.