Close friend of Paul Harris. It was Paul and Silvester who met for dinner
on Thursday evening, the 23rd of February, 1905. 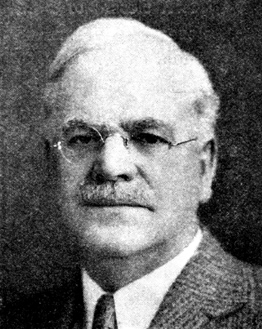 The Schiele family originated in Wittenberg, Germany before immigrating to America and landing in New York in the spring of 1852. From there the family went to Montgomery County, Pennsylvania where there were already many German settlers; the ‘Pennsylvania Dutch’ or more properly ‘Deutsch’. According to one account (1), the family moved on in 1854 to Medina County, West of Akron, Ohio and seven years later to Indiana. There, after a short stay in Owen County, near to Bloomington, the Schieles finally crossed the county boundary to Harrison Township in Clay County, Indiana. Although trained in Germany as a shoemaker, Michael Schiele, Silvester’s father, also took up farming and by 1888 was the owner of a large and prosperous 220 acre farm.

After Michael’s first wife Mary died, he married Elizabeth Krieble from Montgomery, PA on February 12, 1867. Of their 9 children, Silvester was the second, born on June 29, 1870 (2). His obituary in ‘The Rotarian’ records, in 1946, that “He was born ….in a log cabin in Clay City, Indiana. He had all the difficulties of a young pioneer.” (3) . Since his parents , were certainly living there at the time, this makes sense. However, according to the IGI, the birth took place in Pennsylvania, but no record of this event has so far been found. The 1880 Census of Clay County in Indiana records that Silvester was born in Indiana and the I.G.I. attribution appears to be incorrect.

Silvester attended school in Terre Haute. Service in the military during the Spanish American war was followed by a move to Chicago. There Silvester involved himself in the coal trade, perhaps using contacts from the mining areas of Indiana. The story has often been told about how in 1896, he found himself unable to recover 20 dollars which he had loaned to a friend. Passing by his coal office frequently was a young lawyer, and one day Silvester asked this young lawyer to help him collect the money. The lawyer was Paul Harris and thus began a friendship between the two men which continued for the next 50 years.

Schiele and Harris even shared a hotel room in those early years of the century when both were still bachelors. They often dined together at Madame Galli’s where, on February 23, 1905, the ‘gang of four’ met to discuss the formation of what later became the Rotary movement. In 1909, Silvester married Jessie MacDonald of Michigan who was to assist him throughout their life together. The two couples, Paul and Jean Harris, and Silvester and Jessie Schiele became great friends and neighbors as well as often holidaying together. In death the two men lie close to each other in the Mount Hope Cemetery. (see below) It was Silvester who suggested to Paul that each of the members of the new club should give a talk about their business, thereby starting a tradition for new members which continues to this day. Silvester had become a successful and Christian businessman, and was President of the Schiele Coal Company from 1902 until he retired in 1939.

His work and life in Rotary is chronicled elsewhere, however it can be noted here that Silvester Schiele became the first President of the Chicago Club and remained involved in Rotary throughout his life. He did not take any international office until July 1945, when he was made International Treasurer. He was not to fill the post for long, dying in Chicago at the age of 75 on December 17, 1945. He was buried in Mount Hope Cemetery in Blue Island, Illinois, where, thirteen months later, Paul P. Harris was laid to rest next to Schiele.