Rotary and the United Nations

​Rotary and the United Nations 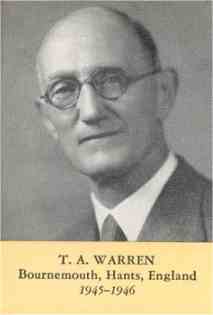 The tragic impact of two World Wars within the fifty-year life-span of Rotary has directed the thoughts of many leaders toward the age- old problem of discovering some method by which international questions might be settled without resort to bloodshed. Symptomatic of this interest was the Rotary conference called in London early in 1942, which succeeded in assembling ministers of education and observers of twenty-one governments—many of whom were then in exile in London—for the purpose of considering the organization of a vast educational and cultural exchange after the conclusion of the war. Later, in that same year, the same group began laying plans for UNESCO.

Rotary International issued, under the title of “Essentials for an Enduring World Order,” two booklets setting forth articles interpreting the Dumbarton Oaks Proposals. The principal objective was to stimulate discussion by Rotarians everywhere on the newly proposed world organization. Two pamphlets entitled “Pattern for San Francisco” and “The Bretton Woods Proposals” also were sent to all clubs, with the result that the proposals were widely discussed.

At the organization conference of the United Nations held in San Francisco in 1945, the United States delegation invited Rotary International to appoint consultants. Eleven prominent Rotarians served in this capacity with resulting influence on the humane aspects of the Charter. In particular, Article 71 of the United Nations Charter attests this influence:

The Economic and Social Council may make suitable arrangements for consultation with non-governmental organizations which are concerned with matters within its competence.

Subsequently, Rotary International was granted consultative status, and through the years prominent Rotarians have served as observers at various important meetings. The right to make proposals has not been exercised, how ever, since Rotary International cannot claim to know the opinions of all Rotarians generally on particular questions. The main role, which has been exercised with great effectiveness, has been in the wide dissemination of information about the United Nations.

Even before the United Nations was firmly established, Rotary’s president, T. A. Warren, had proclaimed a week in October of 1945 as “United Nations Week” for simultaneous observance by Rotary clubs in all parts of the world, for the purpose of spreading knowledge of the United Nations. This observance was continued with growing scope and intensity from year to year. In 1953, its designation was changed to “World Fellowship Week in Rotary Service” which now includes United
Nations Day—24 October—as fixed by the United Nations General Assembly.

A great variety of activities have distinguished this observance. Dinners, school assemblies, public forums, essay contests, parades, exhibits, folk and film festivals, distribution of literature, and special programs at Rotary club meetings during the week. One feature has been the linking by correspondence of innumerable Rotary clubs with clubs in other countries. Out of this vast correspondence has come much that is good, not to mention a sympathetic understanding of mutual problems. 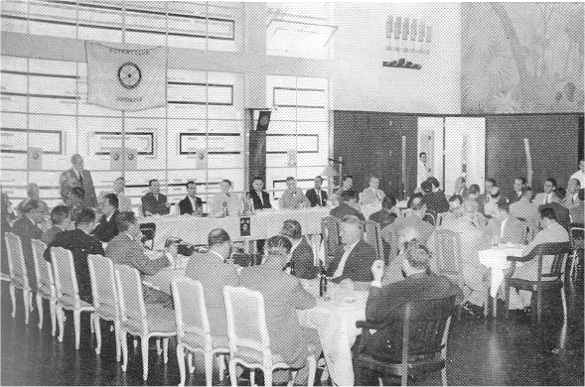 A meeting of the Rotary Club of Guatemala in October of 1953, in Observance of U.N. Day.

In the British crown colony of Ceylon there is a Rotary club with has international service as its principal objective — in this instance a program in observance of United Nations Day. 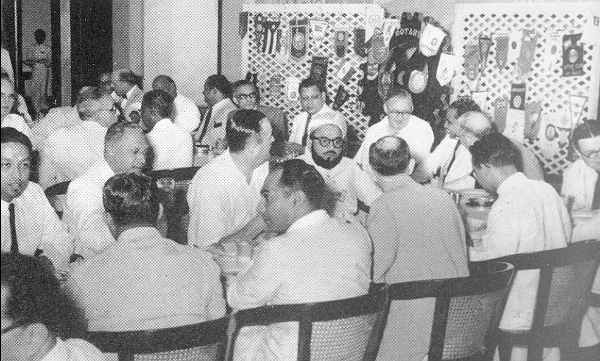 The Rotarian has presented, through the years, many critical and explanatory articles by prominent spokesmen. From Here On! — a 124-page commentary on the United Nations Charter — was published in seven successive editions with a total distribution of close to a quarter million copies.

In the Minds of Men, a booklet dealing with UNESCO, was acclaimed by the deputy-director general of that organization, as the best commentary on the constitution then available. Its successor, The World at Work was similarly acclaimed by many school officials. Stimulation of teaching about the United Nations in local schools became a popular and widespread project of Rotary clubs. The Report on U.N. by Rotary International was published monthly for five years, 1947—1952. It was an unbiased, objective recording of outstanding events, and attained a circulation of 50,000 in English, French, and Spanish editions.

One of the most effective projects was, and still is, the sponsoring by Rotary clubs in their local schools of mock sessions of the United Nations. Students represent delegates from member nations and debate seriously the great questions of the hour. Literature on this subject as well as other projects, prepared by Rotary International, has been in constant demand by other organizations.

Rotary International shared with the Carnegie Foundation the cost of maintaining fifty students, many of them Rotary Foundation Fellows, for an eight-week period at the Head quarters of the United Nations, so that these students might have a first-hand knowledge of the work of the organization. This project was continued for two years.

Radio programs on the U.N.

Many radio programs built around the United Nations have been sponsored by Rotary clubs in the United States and Canada through the co of local radio stations. These programs followed largely the pattern of panel discussions. The scripts were provided by Rotary International. Subjects included the international exchange of ideas and goods, disarmament, aid to under-developed countries, and many other topics of broad human interest. The stations contributed the time as a public service and the prominence of the participants in many of these discussions—in one notable instance a bishop, the editor of a metropolitan daily, and the president of a university—insured an audience of many millions.

Statement of Policy—Adopted by the board of directors of Rotary International in 1952, and confirmed in 1954, is the following statement of policy relating to the United Nations:

The secretary is instructed to bring to the attention of Rotary clubs program information and other helps in connection with the study of the charter and the activities of the United Nations to the advancement of world peace.

Continued publicity shall be given to the reports of the observers for Rotary International who attend the meetings of the United Nations and its specialized agencies.

Rotarians desiring to make a proposal concerning the United Nations or any of its specialized agencies should function through the duly constituted governmental channels of their own country.

This is not the whole story of the United Nations and Rotary. The whole story can never be told—for it has to do with the quiet influence of many Rotarians who were members of the various delegations, men who exercised leadership in the many discussions when the charter was being formulated. Such men as Paul Henri Spaak, of Belgium, who was to serve as president of the General Assembly, a long-time honorary member of the Rotary Club of Brussels. And Fans El-Khouri, of Syria, one of the signers for Syria of the charter, now a member of the International Law Commission of the U.N., the founder of the Rotary Club of Damascus.

Also there should be noted the name of Warren R. Austin, for many years the distinguished head of the United States delegation to the U.N., a charter member and first president of the Rotary club of his home town in Burlington, Vermont.

Another signer of the charter is also a former vice-president of Rotary International, Carlos
P. Romulo, of the Philippines, a long-time member of the Rotary Club of Manila, who also served as president of the General Assembly.
The message which he sent to his club while serving U.N. in that important capacity might well stand as a concluding note to this recital of Rotary’s contribution to a world organization for law and order and justice to all peoples everywhere. This is the message that he sent:

“GOODWILL — the core of every Rotarian’s service to his community — is one of the very essentials of this Union of States. Without good will, no international agreement is possible. To this end, I propose, in the best tradition of good will known to Rotary to discharge the delicate and multifarious duties of my present office. I make public avowal of Rotary influence in having enriched my international outlook and human under standing, and in thus having helped to prepare me for this difficult responsibility.
I send you my most heartfelt Mebuhay, confident that you will carry on with faith and optimism. To you, as the poet said, I hand the torch; be yours to hold it high.”