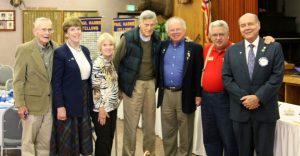 Many high school and college students are asked to read The Education of Henry Adams by Henry Adams. Many would say that it is the seminal book on the subject. Well, I am here to tell you now, a wonderful book entitled, “A Process Mind.” and subtitled, “A Timeless Journey of Identifying Problems and Creating Effective Solutions.” by Richards P. Lyon M.D. has replaced or stands shoulder to shoulder with the education of Henry Adams.

This book examines the thought process of an inquiring mind. How it develops and thrives. Such a mind may be slow to remember because it takes time to form the connections and associations that make information meaningful. The goal is not quick memorization. The difference is the remembering and if you haven’t “catalogued” that information, it will soon be lost to ones recall.

Richards Lyon says in the preface, “I have come to believe that enthusiasm, call it passion, is a catalyst, unquenchable and indestructible, at times allowing one to accomplish what seems impossible. The Process Mind is ideally suited for this endeavor, for it demands basic truths to be stored and recalled. Possibilities of new concepts and new uses fan out, requiring only solid judgment as to their value and their doable potentials.”

The book takes us through many examples where he has been able to recognize and unearth the real problem, fix the problem, do it now and be effective.

The medical procedures and language is within everyone’s grasp. Dr. Lyon writes sparingly and with great clarity. 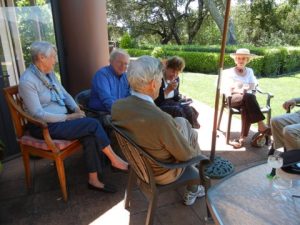 Richards was an engineering student before deciding on a medical career. He credits his engineering mind that led to many life saving inventions that he developed to aid in the recovery of many patients.

When dealing with little girls and boys who have urlogical problems he is at his most caring and the research that he does is staggering. He may not hold patents on his inventions but those life saving devices are saving lives in hospitals around the world.

From a historical perspective, it is intriguing how Doctors diagnosed problems before expensive modern tools such as MRIs.

An inquiring mind needs mentors because there is such a need to know. When Dr. Lyon meets a kindred inquiring mind he is ever quick and ready to mentor that Doctor even if it is half-way around the world and through the internet.

The book is written chronologically and includes details of the eight-month bicycle tour that he took with his brother, Ted in 1936. His father, Harvey Lyon, was the founder of the Lyon moving and storage company and was the president of Rotary Club of Oakland #3, which included much of the East Bay, at that time. Harvey also became an early governor of District #2 covering California, Nevada, and Hawaii. Since Rotary was in 57 countries at that time, naturally, Dick and Ted were given contact information everywhere they went.

Because Harvey Lyon was instrumental in the formation of other clubs and an avid Rotarian, Paul Harris would visit them in their home in Piedmont. Dick, now 94 years old, knew Paul Harris as a close family friend. Through the recordings, books and writings by Paul Harris we have one picture, but what was he like as a person? Dick says he was a quiet man. 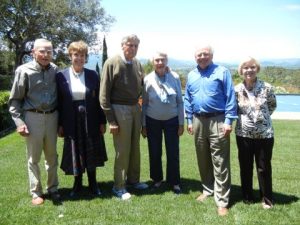 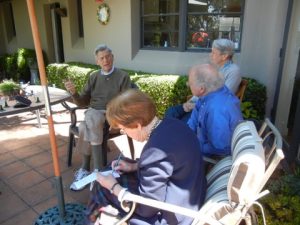 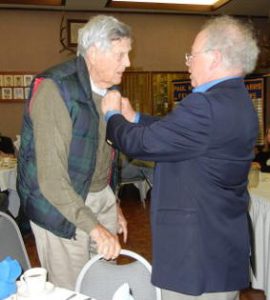 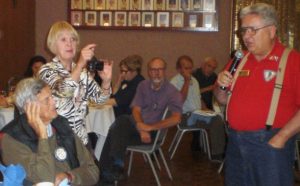 RGHF zone 25 board member PDG Mark Flegel presents Dick’s membership pin at the Napa club, and Selway is asked, by Dick, to explain what it is that RGHF does and why we are there 13 July 2011

Jean taking notes for this article. 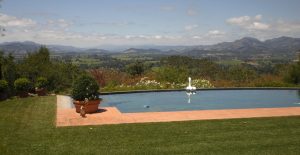 The view from their home.