Ramon Himmelstrup MacFarlane was born to Frederic Charles MacFarlane (1889-1948) of Frederiksted, St. Croix (DWI) and Cleomene Malvine Clendinen (1885-1962) of Charlotte Amalie, St. Thomas (DWI) on November 14, 1935 in Dayton, Ohio (USA). Reared in the Dayton, Ohio School System, this 1953 graduate of Paul Laurence Dunbar High School attended the University of Dayton (majoring in Pre-Medicine). In 1957, Ramon transferred to Central State College in Wilberforce, Ohio from which he graduated in 1960 with a degree in Elementary Education. In 1970, he received his Masters degree from Xavier University in Cincinnati, Ohio with a major in school administration. Completing all his coursework, he obtained an ABD leading to a Ph.D. in Educational Foundations and Research at the ‘Ohio State University’ (OSU) in Columbus, Ohio. He also co-taught the OSU Graduate Course, “Desegregation Awareness”! In addition, Ray possesses an (Honorary) DD. and a Ph.D. from Buxton University (on-line) in ‘Multicultural Education’.

In 1989, after ten years with the Human and Civil Rights Division of the National Education Association (NEA), Ramon took a leave of absence from the NEA to join the Milwaukee, Wisconsin-based, ‘Compact for Educational Opportunity’ (CEO) as its Manager for Staff and Parent Services & Human Relations Training.

In 1993, Ramon began his life in Rotary. Sponsored by PDG Karl V. Hertz, a past president of the Thiensville-Mequon Rotary Club, he started on the Board as its Director of Vocational Service. Going through the chairs, Ramon became president of the T-M Rotary Club in 1998-1999 the same year he was diagnosed with kidney disease (ESRD). Having taught at Concordia University Wisconsin (CUW) as a member of its adjunct faculty since 1994, Ramon received a kidney transplant from his wife in 2001 and is retired from the university.

For the last five years, Ramon has served as the editor of the club’s newsletter, the ‘T-M Rotarian’ and was a nominee for the position of district governor. He has been a host parent numerous times and serves as the Rotary Youth Exchange (RYE) counselor. The recipient of many honors and awards, Ray has served as the historian of the Club’s ‘Guatemala’ project and currently serves as the co-chair for a joint fundraiser for the Centennial Project ‘Walk for the Rotary Riverwalk’. He has served on several Rotary Boards and has been a board member of the Allied Council of Senior Citizens, the Interfaith Caregivers of Ozaukee County, Inc., Gideon’s International and the Cedarburg Cultural Center to name a few. He and his wife, Ellen are both Paul Harris Fellows, the only husband and wife team in the T-M Rotary Club and are ‘Life’ members of the NAACP and the American Association of Kidney Patients (AAKP). In case, it wasn’t mentioned, Ray and his wife also have perfect attendance.

Clock wise from below left: With Basil Lewis, UK; Joe Kagle, USA; and Calum Thomson, Scotland (dark jacket on right) our friend “Gentle Ray” is hidden from view. A most modest Rotarian quickly became beloved by all for his quiet duty. His constant duty at the 2007 Convention booth. Ray MacFarlane, USA, and his #1 cheer leader, wife Ellen Marie MacFarlane, and two photos of Ray and 06/07 RGHF president & Chairman of the board Calum Thomson, Scotland, in the booth largely created by Ray along with Joe Kagle.
We need RGHF members like Ray. 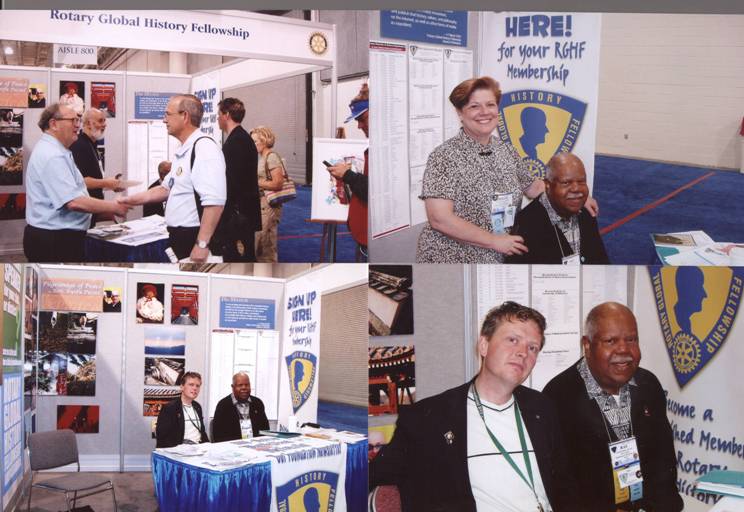