Photos from the Harris Study

Friendship Trees in the Harris Study

Although Sydney Pascall was probably the first leader of Rotary to plant a tree of friendship,
it was Paul Harris who took up the idea and there are 7 photographs in the Gallery showing him doing this.

One of these dates from Paul Harris’ tour of Northern Europe in 1932. 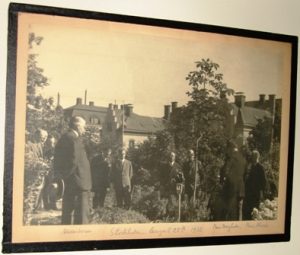 It is a black and white photograph captioned “Stockholm, August 25th, 1932” with the inscription: “Alexanderson, Pane Berryholen, Paul Harris”. On August 25 Paul Harris planted this tree in Stockholm en route between Finland and Norway. “Alexanderson” may be the influential Swedish lawyer and politician Nils Alexanderson (1875-1960), who probably was a member of the Rotary Club of Stockholm. It is also suggested that Pane Berryholen came from the US Embassy in Stockholm. Help is needed in confirming this.

In the spring of 1935, Paul and Jean Harris made a major journey to the western rim of the Pacific, visiting Hawaii, China, the Philippines, Australia and New Zealand, as well as Japan. They arrived at Yokohama on the ‘S. S. President Coolidge’ with a party of 15 Rotarians and their wives, among them Tsunejiro Miyaoka, a Director of RI from the Tokyo Club and President of RI, 1934-1935, Robert E Lee Hill from Missouri, U.S.A. The group was on their way to the Regional Conference to be held that year in Manila. 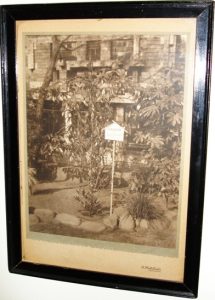 On February 9, 1935 in the grounds of the Imperial Hotel in Tokyo, then as now the meeting place of the Tokyo Club, Paul Harris and Bob Hill planted a commemorative tree. (pictured above) The original Imperial Hotel was designed by Frank Lloyd Wright, the famous American architect, but after war damage, the hotel has been rebuilt to a different design. The foyer of the old hotel is now used as a refreshment centre in the Meiji Mura historic buildings park at Inuyama near Nagoya. There is a black and white photograph in the gallery showing this tree in front of a building. A sign near the tree reads: “GEKKEIJU (laurel) Planted by Mr. Paul Harris and Mr. Robert Hill of Rotary International, February 9th 1935”. Photograph taken by K. Photostudio Tokyo Kaikan.

Later that spring, the Harris’s went on to Australia. A group of (pictured above) three black and white photographs with Paul Harris in each are captioned: “Planting a friendship tree in Hobart, Tasmania”. This tree was planted on March 27, 1935 in St. David’s Park in Hobart. The Park is in the inner city, a very pleasant place with a lot of trees and lawns. The memorial plaque is still there. Unfortunately in 2005, during a time of very strong winds, the tree planted by Paul Harris was so badly damaged that it had to be cut down. The Hobart City Council planted a replacement in a spot close by and placed the commemorative plaque by it. At present therefore, the site is only marked by a very small young tree.

The following year, 1936, the Harris’ were in Central and South America. One (Pictured above) black and white photograph is captioned: “President Emeritus Paul P. Harris Planting the Tree of Friendship at Parque De Los Aliados in Montevideo [Uruguay] April 12 1936 assisting the city’s Authorities are Members of Rotary and local school children”. 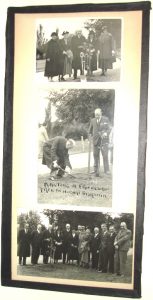 From the same tour, (pictured above) is a black and white photograph of Paul Harris and several onlookers including Jean Harris. It is labeled “Tree Planting Rio de Janeiro” but no date is given. 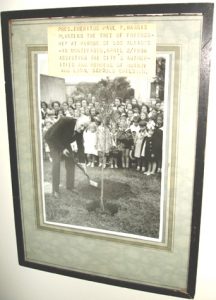 The Harris’s were frequent visitors to Florida and there is (Pictured above) a black and white photograph of Paul Harris and a little boy planting a tree. Two men stand nearby watching. The original picture in the Orlando Club files is captioned: “Paul Harris, Founder of Rotary International, frequently spent the winter months at Clermont, Florida and visited the Orlando club several times. Here, on March 3, 1937, he is shown planting an oak tree at Lake Eola off Osceola. Assisting him is John T. Branham, Sr. President of Orlando 1936-37, and a little namesake “Paul Harris” of Apopka. 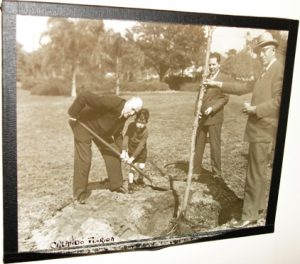 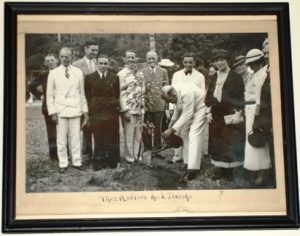 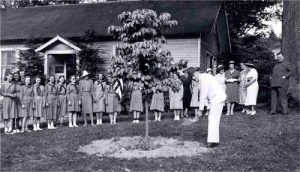 There is a second photograph showing Harris planting a tree in the United States and this from White Sulphur Springs.

It was the 1939 International Assembly. The club’s original meeting place was torn down in the early 80’s and a new library erected. There was some miscommunication with the contractor, rather than move the tree it was destroyed. The president of the club when Paul Harris presented the tree was Ken Gillespie. In the late 80’s his grandson was the President and replanted a tree in the town’s Memorial park.