More Than One Club in a Community?

The Need For Extension

More Than One Club in a Community?

The following article appeared on page 15 of the May 1939 issue of The Rotarian. Cogently written by Stanley Leverton, a past president of the Rotary Club of London, it puts to bed those arguments for keeping large cities in the hands of their original Rotary Clubs.

More Than one Club in a Community? 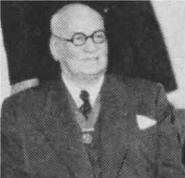 I AM in entire agreement with the formation of more than one Rotary Club in a large community, but I am unalterably opposed to breaking up any large Club to gain that end. To interfere with the size, the prestige, and the collective strength of the large and influential Clubs, which have contributed so much to Rotary’s success, would be seriously to weaken our movement.

But we want to extend our Rotary fellowship further; we want more Clubs and more Rotarians. Thus let us prepare to amend the Constitution of Rotary International to permit the formation of additional Clubs in large cities without interfering with the existing territory or membership rights of the Rotary Clubs already founded therein.

Now this is a new thought. If realized, it would create a new situation: a large Club operating in an area within which other Clubs would be functioning, each of the latter, however, possessing its own definite territorial limits. Simply a practical and useful method of employing territory to its greatest advantage. Surely the happy sharing of the potentialities which any territory might hold for Rotary is in strict accordance with the Rotary spirit. But I shall be told that this plan would create two kinds of Rotary Clubs and two kinds of Rotarians. Frankly, I do not believe it. Yes, here and there one might find a Rotarian who would flatter himself upon belonging to the founder Club rather than one of the younger clubs in his town. But his kind would be rare. Certainly the progress of Rotary must not be checked on his account.

Adopted, the plan would give present members a choice of remaining in the founder Club or joining one of the additional Clubs. Many would remain, and so you would have members in the original Club coming from areas in which new Clubs had been formed. That is just what has happened, in fact, in London, and the procedure has never given the slightest difficulty at any time during its 15 years of existence.

Today, when there is a classification vacant in the Big Town Club and two or more excellent men are anxious to fill it, one is elected and the others rejected The rejected are kept out of Rotary, perhaps for all time? Tomorrow, under this plan, they would have the opportunity of joining a daughter Club established in the locality wherein their businesses are situated. Indeed, the plan would admit many thousands of excellent men into our movement who at the moment must be kept out—men for whom Rotary has great need today. At the same time it would keep Rotary’s dominating and vital feature, the single-classification principle, in any given Club.

The very usefulness of Rotary in a big town will be materially increased under this plan. If a Club has done good community or social work already, how much greater can that work become if the parent Club can call to its aid certain of its children who have set up homes of their own in other parts of that town. Each Club would be an entirely self-contained and self-administrated unit, however, and such joint action can be temporary or permanent according to local desires.

The same argument applies to Vocational Service Work. For ten years I was the only representative of my classification in Rotary out of a population of 8~/2 million. Today there are nearly 40 of us. These men are no longer my competitors in business; they are my friends in Rotary—and collectively in our professional organization, believe me, we count for something.

I do not blame the big Clubs if they refuse to let go until they are satisfied that the Club, which they have taken such pains to build, will remain unmolested. But I sincerely believe their opposition will disappear if they can be shown a plan that would not interfere with their prestige and their territory. The plan proposed here leaves them alone. They could carry on as at present.

Although extension in London has proceeded in a different manner from that suggested here, it has achieved the same end–and has been a success from every point of view. It is that fact, no doubt, which has led the London Club to endorse the opinion stated here. Today we have 65 healthy Rotary Clubs embracing 3,000 members in the London area, and I believe that the success, which London has found, could be shared by many other large towns. A start could be made in towns with a population of, say, half a million. How many such are there in the United States? These towns have one Club only–one Club in a town of 500,000 people! In how many towns of 10,000 people–or even of 1,000 or 500 people–are there excellent Rotary Clubs? And a large number of towns have over half a million; but each has only one Rotary Club. Suburbs of some of these cities have their own Rotary Clubs, but, even so, there remains an enormous territory and population that has but one Club.

Now, am I unreasonable when I say that Rotary is not enjoying a fair deal in these large cities? Rotary has given members of these big Clubs much happiness and has made their lives richer. Now in a spirit of unselfishness, they can make it possible for hundreds more in their respective cities to join their ranks and participate in that joy. But some will say, “It will make Rotary cheap.” Things of real worth can never be made cheap, however much you multiply them.

Do not be led away by the claim that all the “big men” would want to join the founder Club–they wouldn’t. If a man’s activities are mostly in one part of a large town, be they business, civic, or social, that man will invariably, if he has the option, join the Club in that part wherein his interests lie, where his friends congregate, and where he will find the greatest measure of good fellowship. We have many men of outstanding qualities in the Clubs of Greater London who would not join the London Club even if they were given the opportunity.

The Constitutional change necessary to effect this proposal would be a relatively simple matter, requiring an amendment of Article IV, Section 2, which defines the “location” of a Rotary Club. And details and difficulties which may never arise are hardly worth any worry. Rotary demands larger representation in large cities throughout-the world than it has at present. I believe that somewhere down this avenue of thought will be found the solution of a very difficult problem. It may well be that, when men have given further consideration to this matter of the development of Rotary in our large towns, a better plan than this can be evolved. If so, I shall be the first to lift my hat to the man who thinks of it. But I do most strongly hold the view that some real effort must be made to give the large towns a fairer deal.

If the London Club had not made such an effort in the past, we should today be the only Rotary Club serving a population as large as the whole of Canada. That would have been unfair to London–and unfair to Rotary. 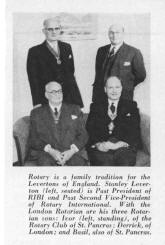 Leverton and his three Rotary sons from the September 1960 issue of The Rotarian.