The Rotary Club of Chicago ‑ Club No. 1 ‑ was organized on February 23, 1905, by Paul P. Harris and three Chicago businessmen. To Paul Harris belongs the credit for originating the “Rotary idea”. The first meetings were held alternately at different members’ places of business.
For the first few months, the growth in membership was slow. In the autumn of 1905, a great event took place in the history of the struggling club. The first roster was printed! It contained the names of nineteen active and two honorary members. Of the nineteen members in this roster, the nine Rotarians shown above are today active members of Chicago Rotary. As the membership increased, other rosters were printed, and finally the illustrated roster was suggested ‑ the idea of Silvester Schiele.

Later, Harry Ruggles introduced “song” into Rotary and he is today still one of the official song leaders of the club. From a small nucleus of nineteen loyal members in 1905, Rotary has grown in seventeen years to a strong, virile movement of 80,000 members with clubs in more than a thousand cities embracing twenty‑two countries of the world. 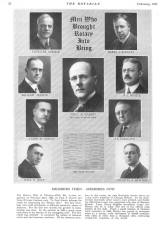 The insert of the actual Roster 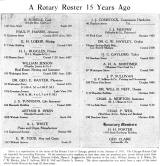 “Of course in 1905 nobody could know what a phenomenal success Rotary would be. So Rotary’s early history is often what has been remembered years later, e.g. the membership roster from 1905 is sometimes referred to from “August”, sometimes from “Autumn”.

Paul Harris in “This Rotarian Age”, the Membership Roster from 1905, and the Chicago Records all agree, that there were 19 members in 1905. The 1924 picture adds only little to the confusion. All the colored names are only found in one of the records – among them Montague Bear!”