On September 4th, 2003, Matts O. Ingemanson spoke at the Rotary Club of Yonkers, which is two times Past District Governor Chuck Katze’s own Rotary Club. Chuck had invited him to give a new speech about Paul Harris. The Yonkers Rotarians heard about the exiting youth of Paul Harris, including his 5 restless years after law school when he traveled to different places in America and Europe and worked as a newspaper reporter, manual laborer, teacher at the L.A. Business College, actor in Denver, traveling marble salesman, cowboy, cattleman and sub-foreman of a gang of cattlemen.

They also heard Paul Harris speak through a recording from 1933. Matts Ingemanson’s presentation, in combination with Paul Harris’ own speech, explained how Paul Harris inspired the creation and growth of Rotary to become the most prominent service organization in the world today. It showed Paul Harris as a youthful person that is more likely to inspire young people to join Rotary. It may surprise you that Paul Harris was only 37 years old when Rotary was founded in 1905 and only 42 years old when he became President of the National Association of Rotary Clubs, which later was re-named Rotary International. 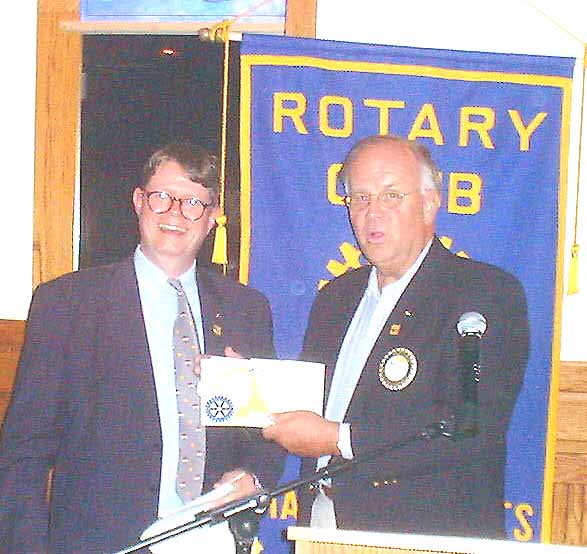 Matts Ingemanson is thanked by President Ralph Nixon at the Rotary Club of Chatham for his speech about Paul Harris on October 1, 2003