In 1919, Rotary had transposed the U.S. borders and the so-called “Association of Rotary International,” asked Don Alfonso Federico Pezet, to organize Rotary Clubs in Peru in consultation with the appointed Ambassador of Peru in the United States, Fernando Carbajal Segura. Simultaneously, he was asked to dissemination all necessary material to effect this task.

From this moment, Don Fernando, began to think of Rotary and seek the necessary elements to implement the order received, by holding talks with James H. Roth who was considered the best connection for this purpose and who was then the acting U.S. Consul in Lima, and was known to be a very enthusiastic supporter of training Rotarians. 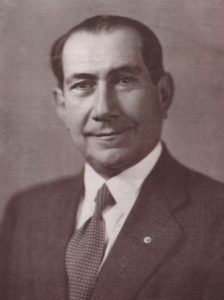 On June 18, 1920, in the restaurant at the zoo, located in the Exposition Park, the twelve founders of the Rotary Club of Lima, met for lunch for the first time. Photo of Carbajal.

In Peru we call Fernando Carbajal the “PAUL HARRIS Peruvian.” The right of Carbajal for this title is indisputable. It was he who brought Rotary to the west coast of South America, to organize in 1921 the Rotary Club of Lima.