A Part of our History of SOUTH AMERICA

Prepared by the district and not verified by Rotary Global History

In 1924 and only four years after founding of the first club in Valparaiso, and thanks to extension work done by Rotarian Eduardo Moore Bravo, District 64 was created on April 1, 1927 with jurisdiction over Chile and Bolivia. Dr. Moore was appointed Governor and organiser for his great leadership, and re-elected on July 1, 1927 for a full term, a period in which the Rotary Club of La Paz was created in Bolivia.

It is recorded that the secretaries of the clubs in San Antonio, Temuco, Osorno, Los Andes, Curicó, Puerto Montt, Santiago, Angol, Concepcion, Los Angeles and Tocopilla also attended.
Among the attendants was Adolfo Ibanez, former president of Valparaiso and who was then Minister of Public Works.

From March 31 to April 1, 1928, the District Conferences were held at the “Club de La Union” of Santiago, at which 28 delegates attended, again as Representative of the RI, Mr James Roth.
At this conference former President Joaquin Lepeley of Valparaiso was elected governor for the period 1928-1929 who sung for the first time, the Rotary anthem with lyrics and music by the priest Gonzalo Arteche, a member of RC Los Angeles.

At that time the district had 32 clubs, which allowed Chile to be the third country in the world with the largest number of clubs, where Rotary was already in 50 countries.

Dr.Moore was later appointed the third Vice-President of RI, working with the President of RI Tom Sutton, in the period 1928-1929.

After this time there was much growth of Rotary in Chile. On 1 July 1928, Joaquin Lepeley (journalist and member of RC Valparaiso was elected District Governor .

The District Conference took place in Concepcion from 8 to March 10, 1929.
54 delegates attended from the 38 existing clubs in the country and with Dr. Edward B. Moore again representing R.I.

On July 1, 1929, Francisco Mardones Otayza from the RC Santiago was elected District Governor after returning from the Dallas Convention.
The District Conference was held in January 1930 in Valdivia, again with RI Representative Dr. Edward B. Moore in attendance.

Victor Ide Schultz of RC Osorno was elected District Governor on July 1, 1930 when the District Conference was held in Puente del Inca and momentously acquired international character with attendees from Argentina, Paraguay, Uruguay, Bolivia and Chile and was attended by 180 delegates.

Manuel Gaete Fagalde of Santiago was elected governor for the new year and despite a deep political crisis in Chile, presided over the formation of two new Rotary clubs.

In March 1932 the District Conference takes place in Chillan with the election of Dr.Edward Moore as the next Governor to commence from July 1, 1932.
11 new clubs were formed in this period.

Luis Calvo Mackenna of Santiago assumed the District Governors role on July 1, 1934 during which, three new clubs were created making a total of 59 clubs and more than 1,500 members.

Between 6 and 9 May, 1935 the District Conference was honoured by the presence of RI Francis from the RC Marseillan of Buenos Aires.

Calvo Mackenna was governor for 1935-1936.
During this year Manuel Gaete Fagalde was appointed member of the Board of Directors of the RI and immediately began preparations for the South American Regional Conference to be held in between 4 to March 8, 1936 with the presence of our founder Paul Harris and his wife.

Equally important was the considerable growth of Rotary in Chile.
Effective from July 1, 1936, there were three district in the country, leaving as follows:-
The District 64, covering the entire north to Valparaiso, and whose governor was Juan Manuel Valle; District 86 to cover from Santiago Ñuble whose governor was Almanzor Ureta and District 87 whose governor was Magallanes Ricardo Neuenborn Christ of Concepcion.

With the creation of the three Districts begins a new stage in the development of Rotary in the country as from 1936 to 1956 conferences were Tri-district, with the first in March 1937 in Osorno, whose Representative of the President of RI was the Luis Calvo Mackenna, who died prematurely on December 2, 1937.

It could be interesting to note that on July 1, 1938, Rotary in Latin America, was represented as follows: 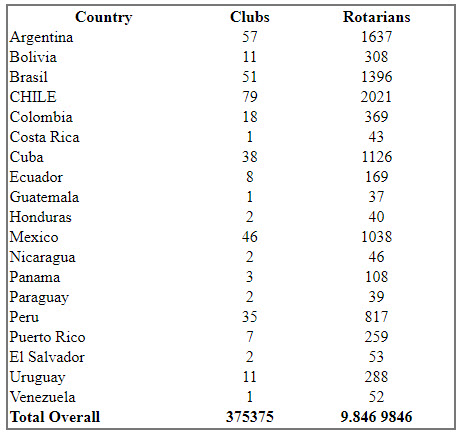 RI President-elect Wilfrid J. Wilkinson, a member of RC of Trenton, Ontario, Canada, proposed to his years as president, 2007/08, a program for small clubs.
Let’s see what this consists of:-
“The smaller clubs often face unique challenges in their efforts at social development of the table. However, the increase of members, even in small numbers, reported big dividends:- more arms for the service, more money for projects, more colleagues in companionship and more people-layer, ready to assume leadership positions.
To encourage the efforts of the smaller clubs, the board of RI recently instituted the program of Recognition for Development of Small Table Social Club, which honors the achievements of these smaller social clubs which assigned priority to growth, and were successful.
The program will start on 1st July, giving recognition to the clubs in the following categories, which meet the growth target of the social objective as established by the directive of 15 May 2008
Category club to achieve Goal
Less than 10 partners.. achieve at least 10 partners
At least 15 partners.. achieve 10-14 partners
15-19 partners.. achieve at least 20 partners”

The Tri-district Conference of 1939 held in March in Valparaiso, was chaired by RI President George C. Hager, a gesture highly appreciated by the Chilean Rotarians.
The President of the Republic with decorate him personally.

In this decade, our country will also be visited by the presidents of RI, Armando de Arruda Pereira in November 1940; Fernando Carvajal in 1942; and Richard Wells in January 1945.
All of whom were decorated by the Government of Chile.

In this period there are two figures that stand out among the Governors.
The first is Armando Hamel de Souza, for his dedication and ability. He was the creator of the Office of the District of Chile, that office for many years served efficiently the clubs in the country. In the period 1942-43 Armando was elected to RI as its third Vice President.

The other figure was Carlos Hoerning Doll, a tireless worker for the benefit of Rotary, which earned him in the period 1945-46, also the Third Vice President of RI

Since July 1, 1947 the three districts from south to north, were allocated new numbers, designated as Districts 126, 128 and 130, respectively.
This numbering is maintained until 30 June 1955, when a fourth District 127, with jurisdiction from the Maule to Malleco, was added.

On stage is highlighting the figure of the Governor Dr. Alejandro Carretón Silva, who was for two years (1955-56) Member of the Board of RI.
Also visiting Chile at this time were two presidents of RI. In 1949 Percy Hodgson and in 1953 Joaquin Serratosa CIBILS.

For the year 1953-54 Ruperto Vargas Molinare of RC Santiago is elected Rotary District Governor.
The Tri-District Conference is held in Viña del Mar in March 1954 and the Representative of the President of RI is Carlos del Forno, San Nicolas, Argentina.

In the year 1954-55 will be celebrating the fiftieth anniversary of RI in Chile and is Governor of District 128 (now 4340) Alberto Vergara’s RC Chambers of Providence.
This celebration is prestigious in our country, for the visit of RI President Herbert Taylor (creator of the Four Way Test) and his wife Gloria, who arrive in Chile on December 6, 1954.
The next day he is received by the RC of Santiago, during which the Minister of Defense and member of Rotary Tobias Barros Ortiz, awarded the Insignia of the Order of Merit Bernardo O ‘Higgins on behalf of the Government.
President Taylor in his speech stressed doctrinal and philosophical aspects of “The Four Way Test” and encourages Rotarians to implement it.
He subsequently visited Valparaiso and Concepcion where he received the tribute of Rotarians and the community.

The celebration of the fiftieth anniversary of Rotary Tridistrital culminated with the Conference, held in Las Termas de Puyehue, which assists in representation of President Ernesto RI Imbassahy de Melo, Director of the Board of RI

The Conference of Tridistrital Puyehue was the last of them, because as of July 1, 1955, establishing the fourth district in the country ranging from Maule to Malleco, with the number 127.
In this conference is elected Governor of Rotary District 128 of the Santiago Humberto Aguirre Doolan, representing the first Dual-district Conference in March 1956 in Cartagena, attending as a representative of the Chairman of RI, Adan F Vargas.
For the period 1956-57, Juan Chiorrini Alveti Rancagua is elected Governor, a period in which the first District Conferences are held separately.
The Conference of District 128 (now 4340) takes place in Santiago, concurring as Representative of the President of RI, Carlos Lino Porro.
District Governor elected for the year 1957-58, a member of RC Benjamin Santiago, Aguirre Amenábar, who exercised his post only in the first half and was replaced by the Past Governor John A. Chiorrini in the second half, holding the conference in Las Condes district and as Representative of the President of RI acted Jorge P. Picasso.

At the Conference of Las Condes, was elected Governor Guillermo Toro Concha for the period 1958-59, who was a member of RC Ñuñoa, its Conference held in Cartagena to be Representative of the President of RI, Francisco B. Garcia.
He was elected governor for the 1959-60 Rotary Santiago Lira Gregorio Silva, whose conference was in the city of Talca, with the representative of RI President Carlos P. Astrada

In this decade, Chile was visited by RI President Charles G. Tennent, who, in an audience with the President of the Republic, is decorated by the Government.
With their assistance and municipal authorities is inaugurated in the Commune of Las Condes, Avenue Paul Harris, erected a monolith.
In the period 1960-61, is Governor of District 474 (now 4340) Benavente Eduardo Garces from the RC Santiago, at which time takes place in Chile once again, the South American Conference in Santiago.
For this reason the Conference of District is Dual-District and takes place in Ñuñoa, acting as Representative of the President of RI, Tristan Enrique Guevara, on November 23, 1960, in the halls of the headquarters of the RC Ñuñoa, the Swiss Club.
From 24 to November 27 was the South American Conference which contributes to the President of RI Edd McLaughlin, accompanied by his wife Pearle and the Secretary-General George R. Means.
The Inaugural Meeting took place on June 24 at the Equestrian Club, with the assistance of the President of the Republic, State Ministers, Members of the Diplomatic Corps and other authorities, in addition to representatives from 14 countries, with a total of 1655 delegates and whose theme was “The involvement of Rotary in the South American cooperation and mutual understanding”
In this era in Chile had four Districts 144 and 4400 Rotary clubs, District 474 had 36 clubs and 1,400 Rotarians.

Some important events occurred during this five years: there were two bidistrict Conferences, held in the Panimávida together Districts 474 and 476 and in the Portillo jointly by the Districts 472 and 474.

On February 20 1963 the President of Chile visited RI Nitish C. Laharry of India, March 11 arrived in the country of RI President Carl P. Millar, accompanied by his wife, Ruth, from 25 to April 27, 1966 Chile visit of RI President-Elect Richard L. Evans Evans and his wife Alice and the visit of President-Elect James F. Conway and Mrs. Evelyn, representing the President of RI Kiyoshi Togasaki, prevented from coming to the last minute due to illness.

At the beginning of the 70s we visited two presidents of RI: in August 1971 what makes Ernst Breitholtz accompanied by his wife Brita and March 15 1973 arrives Roy D. Hickman and his wife Dorothy.

acknowledgement to the Board, clubs and members of District 4340
Researched and posted by RGHF Senior Global Webmaster, Greg Barlow, Malaysia 16 August 2008