After his period of Rotary service in Europe, he returned to Brazil, in August 1928, being received by Rotarians in the Rotary Club of Rio de Janeiro.

In 1929 he recommended to the Board of Rotary International to create a district specifically for Brazil. Previously, there were only two Districts covering the whole of South America. Thereafter all the district conferences were held in Brazil until the date of his departure, in 1942.

Homage was given by Brazilian Rotarians of Districts 26 and 27, in the form of thanks for his considerable work in developing Rotary in Brazil. In 1942 he terminated his position as Rotary International’s representative and returned to his homeland.
His connection with our nation, however, continued, since Jim took over the post of executive secretary of the Brazilian American Association, an organization devoted to the development of trade and social and cultural relations between Brazil and USA.

His devotion to Rotary in Brazil was finally recognized in consequence of a campaign by Rotarians from around the country and spearheaded by his friend, Armando de Arruda Pereira.

James H F Roth was awarded the highest decoration given by the Brazilian government to foreigners – the Order of Knight of Cruzeiro do Sul. Cavalheiro Decoration of the Order of the Southern Cross, awarded to James Roth in September 1947 by the President of Brazil, Eurico Gaspar Dutra, the highest decoration given foreigners. It was presented in September 1947 by the consul general of Brazil in New York, Walter Sarmanho, who in turn represented the acting chairman, Eurico Gaspar Dutra, for his work in Latin America, serving Rotary, closer relations between peoples and disseminating the national flag.

James H. Roth at his home in Ventura, California, USA, showing its two decorations, the Order of Knight of Cruzeiro do Sul received from the Brazilian government in September 1947, and the decoration he received in Ecuador. For the greater part of his life he traveled in the service of Rotary, throughout 47 countries.

This history was copied and edited from a Google translation of an article published by the Musea Armando de Arruda Pereira.

Acknowledgment is given to the Fundação do Rotarianos de São Paulo. 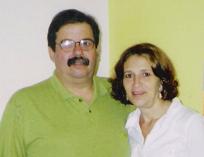 For the history of all clubs listed above, we are indebted to Otoniel Santos Neto, Rotary Club de Curitiba – Portão whose compilation of the histories of 37 Brazilian Rotary Clubs can be found at http://www.geroi.org.br/otoniel/otoniel.php
Researched and posted by RGHF Senior Global Webmaster, Greg Barlow, Malaysia 16 August 2008