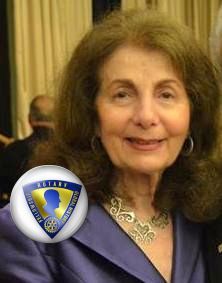 “This is the most exciting “Fellowship” project that Rotarians have ever undertaken by Rotarians, for Rotarians, and about Rotarians. We have been traveling on “fast forward” for so long that it’s about time we stopped to examine our “roots.” The information will most certainly give us more “club esteem” and inspire us to work together into the future with the bonds that will be strengthened between us as a result of this global project.”

Pillars of strength
By Helen Reisler

On 1 July 2001, I was installed as the Rotary Club of New York’s first female president. The club was about to celebrate its 92nd anniversary, and it made a big production of my installation. A group from the New York Police Department marched me in, singing “New York, New York”; I announced my agenda for the coming year; everybody toasted. And we thought that would be the historic event of the year.

The morning of 11 September, I was in my Brooklyn apartment getting ready for a club meeting. My daughter called and told me to turn on the television. I watched as the second plane struck, and it dawned on me that I was on an island. My family was not there: My husband was in the suburbs at our home, my children were scattered. I worried that some of the members of my Rotary club were at the World Trade Center – a fear that was later confirmed. I’d never felt so alone.

Then I turned on my computer. Messages from Rotarians all over the world were pouring in – from Lebanon, England, Israel, France. Club presidents were asking, “How can we help?” I spent days at my computer trying to keep up with the messages from people in different time zones. I hardly slept. The checks began coming in. I called our club’s executive director and asked him to work with the chair of our club’s foundation to open a special account. Then I called an emergency club meeting.

We had 185 members at the time and were fortunate not to have lost anyone in the attacks. I remember thinking it was important to keep the members feeling safe and hopeful. I worried that those who didn’t live in Manhattan might be afraid to come to the meeting. But everyone showed up. I recalled how, as a child during World War II, I’d participated in air-raid drills at my school. As the children were hiding their heads in their hands, my music teacher had asked me to run down the halls singing “Home on the Range,” just to give them some hope. After 9/11, I felt the same call to inspire the members of my club.

At every meeting, we played patriotic songs. I invited firefighters and others who’d been injured to attend. I invited people who had lost loved ones: a widow and her child, a father who had lost his son and who continued to attend meetings. I made the club a haven for those who had been affected by the attacks – not only to support them, but to motivate the members of my club.

I often was up until 3 a.m. coordinating the teams I’d organized. That was one of the most important things I did: make personal contact with members, organize and motivate them, give them hope. I had an Internet team to spread the word. We used the Internet to explain to donors what we were doing with their money and to show them the reality of the situation in New York. Another committee organized members to head to ground zero to volunteer their skills. All of our members have unique skills. One is a forensic dentist who helped identify victims in the days after the attacks; one is an officer in the New York branch of the American Lung Association who tested the air quality at the disaster site; another, who owns a courier service, used his van to bring bottled water to the volunteers. We also had an 85-year-old member who helped Salvation Army volunteers serve food.

Then there was a committee to identify people who needed emergency funds. Some of the committee members weren’t even Rotarians, but they later joined. I made applications to hand out to people who needed assistance. Team members traveled on foot to churches, synagogues, firehouses, and police stations. Everything was personal and well organized. We went to meetings of the Better Business Bureau and various charitable organizations to find out where the need was greatest. We found individuals with touching stories who needed our help. Some had lost their adult children and suddenly found themselves the sole caretakers of their grandchildren. Another man lost his daughter, who had been helping him pay rent and maintain his home.

When Rotary clubs in Michigan volunteered to assist children who had lost a parent in the attacks, I formed another committee to coordinate that effort. In all, the Michigan clubs adopted eight mothers and their children. For an entire year, the clubs sent the families money for expenses, along with letters of support. The committee also organized a way to give back to the first responders who worked day and night at ground zero in the months after the attack. Volunteers offered firefighters and police officers weekend family getaways at vacation rental homes in Nantucket. We even sent a firefighter and his new wife to New Zealand and another couple to England; the host clubs and districts welcomed the New Yorkers as if they were their own. One firefighter told me he cried when he got the application for his vacation.

Every year, we honor the firefighters and the police, and every year, I receive a phone call from one of the men and women whom we helped. Last year, I invited John Jonas and his crew to speak at our club. Dubbed the Miracle of Ladder Six, they are a group of firefighters who were inside the World Trade Center on 9/11. The crew recounted how, as they were running down the stairs of the north tower, each carrying 100 pounds of gear, a woman they were helping collapsed from fatigue. Though the building was crumbling around them, they refused to leave her and, as a result, became trapped in the stairwell. Hours later, they were able to escape with the woman. But had they not stayed to help her, they said, the entire crew would have been killed in the collapse. When they finished telling the story, Jonas thanked his men for their bravery. Everyone in the room was clearly moved.

People often remark how terrible it must have been to be the president of the Rotary Club of New York on 9/11. I say just the opposite. I thank God I was in that position. I’m grateful to have used my skills of coordination and my ability to inspire. One of the greatest compliments I received was when one of the men in my club said, “You know, Helen, we were talking about what you did after 9/11. We looked around and asked, ‘Who, out of all these men, could have handled that?’ No one.” I did it for myself and to open doors for other women. Many women have joined the club since then, many of them young. Somehow, I’ve set myself up as a mentor (that’s what the members of my club call me, anyway). And I love it. I love to inspire them. I love to help them feel proud to be Rotarians.