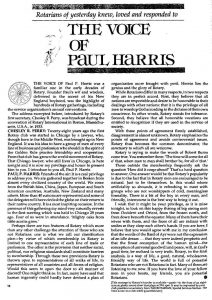 Transcript of the entire speech

The heart or “spirit” of Rotary came from one man, Paul P. Harris. In 1933 Paul Harris gave a radio address to “non-Rotarians” to interest them in joining the 28 year old organization.

“A great sign of Paul Harris’ optimism is his recorded speech of 1933, which took place when both Hitler and Stalin were in power and America was in its deepest depression.”

Listen now, to this 1933 Radio Broadcast by Paul Harris. He is introduced by Ches Perry, General Secretary of Rotary from 1910 until 1942. The broadcast was during the Rotary International Convention in Boston. Paul Harris mentioned Rotarians from around the world listening to this broadcast, including China. Harris speaks for about 6 minutes and tells the audience that if they have “Love for fellow ‘man’ in their hearts” they are potential Rotarians. Now, just click on the radio. Paul Harris recording courtesy of Rotary First 100 committee member Art McCullough. Real Player file compression – Suresh K. Volam, RC of Garden of the Gods, Colorado Springs, CO D5470.

Another version, transferred by Rotary International, from a 2009 grant from Rotary Global History Fellowship www.rghf.org/grants/recipients/2009/archives0909.htm

Paul Harris speaking during the intermission of the 27 June live radio broadcast of the Boston Symphony Orchestraâ€™s performance at the 1933 international convention. Harris introduced by Chesley Perry. Harris notes the international nature of RI and that Rotary is/can be a common bond across cultures; reminisces about first meeting in Chicago; explains classification system and notes that racial, religious, or political affiliations/standards shall not be a barrier to membership; Rotary is a way of life and the world is full of potential Rotarians.

Audio begins with introduction to the product in a *woman’s voice (possibly recorded when the speech was distributed ca. 1980) (MP3 File)

The February 1980 issue of The Rotarian includes a transcript. The April 1980 issue (and others) ran ads for the soundsheet recording being sold(PDF) at the time. Both are attached here.

Questions about these audio pieces can be directed to Rotary History and Archives staff – history@rotary.org

*In the story accompanied by a sound recording of Paul Harris speaking at the 1933 Convention, introduced by Ches Perry, the woman voiceť referred to in the story was that of Jo Nugent, at that time Associate Editor of The Rotarian magazine â€“ an accomplished journalist and a charming lady who served Rotary with loyalty and distinction for many years. You might like to add this small bit of information to the archive. I still have the sound sheet that was in the February, 1980, issue of the magazine to celebrate Rotary´s 75th anniversary and, because of its fragility, I made a tape recording. Now I can access it by courtesy of RGHF. With warmest regards and best wishes for your continued success,

Past Governor (1974-75), District 269/969/9690/9685 (Member of RGHF)
1933, Boston: Chesley Perry, general secretary, Rotary International: Twenty-eight years ago the first Rotary Club was started in Chicago by a lawyer who though born in the Middle-West, was brought up in New England.

It was his idea to have a group of men of every line of business and profession who should in the spirit of the â€śGolden Ruleâ€ť – practice friendship and cooperation. From that club has grown the world’s movement of Rotary. That Chicago lawyer – who still lives in Chicago, is here tonight. And it is now my privilege and honor to present him to you. I introduce to you all Paul P. Harrisâ€ť

Friends of the air. It is a real privilege to address you. We are gathered together in Boston from almost every civilized country of the world. We come from the British Isles, China, Japan, European and South American countries, Australia, New Zealand, and many others.

More than forty nations are represented and some of the delegates will have circled the globe on the return to their native countries. It is a most inspiring occasion.

In the present to this gathering, my mind very naturally reverts to that first meeting which was held in Chicago 28 years ago. Four of us were in attendance: Mighty Oaks, from Little Acorns Grow.

Perhaps there are 2 features of Rotary which more than any others challenge the attention of those who are not Rotarians.

One is what we call our classification plan by virtual bridge. Membership in Rotary is limited to one representative of each line of trade or profession.

The other is the provision that neither riches, political nor religious standings shall constitute barriers to membership.

To these two provisions, Rotary is thrown open to representatives of all walks of life.

To representatives of all countries and all forms of religion.

Would this mean to open the door to all manner of discord? One might think so. In fact many have said that human ingenuity could hardly divide a plan of organization more fraught with peril. Here in lies the genious and the Rotary, the glory of Rotary.

The formula of procedure is indeed simple. Why Rotarians differ in many respects – in two respects they are in perfect accord.

First they believe that all nations are respectable and desire to be honorable in their dealings with other nations. That it is the privilege of all men to worship God according to the dictates of their own conscience. In other words Rotary stands for TOLERANCE.

Second they believe, that all honorable vocations are entitled to recognition if they are used in the service of society.

With these signs of agreement firmly established, disagreement is almost unknown.

Rotary emphasizes the points of agreement and avoids controversial issues.

Rotary thus becomes the common denominator, the sanctuary to which all are welcome.

Is there any valid reason why catholic and protestant, Jew and gentile should not enjoy friendly intercourse?

Where it is done in rotary, catholic priests, Jewish rabbis and protestant ministers sit side by side in happy fellowship at Rotary Club meetings. Even if travels take you to India there you may meet Mohammedans, Hindus and Christians, breaking bread together. Is this not as it should be?

Remember the words: Peace, honor, goodwill toward all men.

To put it readily: Rotary is trying to make the words of Robert Burns come true:

You remember that: The time will come for all of us where man to man shall Brother be for a’that.

Those outside the membership frequently ask the question.

How did it come about? That’s a hard question to answer.

One answer would be that Rotary’s popular appeal is due to the fact that In Rotary men are encouraged to be natural. Just to be themselves. In this world were artificiality so abounds, it is refreshing to meet with groups who are not worshippers of cold meaningless formalities.

Further there is a bit of the boy in every man, and friendly natural intercourse is the best way to bring it out.

I wished it might be your privilege, as it is mine tonight, to look in on this happy throng of big strong men from occident and orient from the frozen north and from down beneath the equator .

Many of them have their wives with them and the faces of all our radiance with smiles as they clasped each others’ hands. If you were here I believe that you would agree with me in my conclusion that the words of the Bard of Ayr were not the expression of an idle dream, that they were indeed prophetic and that the finest conception of human mind the conception of universal goodwill and peace will in God’s good time be realized in very truth.

Rotary in a final analysis is a way of life, of a good, natural, wholesome friendly way of life.

The world is full of potential Rotarians who are not Rotarians in fact.

Many of them are listening to me now.

If you have the love of your fellowmen in your heart my friends, you are potential Rotarians.
-end-

www.rghfhome.org/first100/ireland-uk/burns.htm may help you in further considering references to Robert Burns as mentioned byPaul Harris in this speech. Harris is heard to mention the “Ayrshire Bard” or Scotland’s Robert Burns. “A man’s a man for a’ that” is mentioned in the speech. PH is clearly influenced by his wife Jean’s Scottish roots. Also see www.rghfhome.org/first100/women/jeanharris