A statement of the international culture of Rotary,
by Paul Harris

Paul & Jean Harris’ first stop on their 1935 tour of Australia was in Brisbane where he wrote in his journal: “The civic reception ceremony was repeated in practically every city we visited in Australia and New Zealand.

Though I was at times somewhat weary, I appreciated them more that I can express in words. As a mean of getting in touch with “men” of importance in business and civic affairs who are not Rotarians, the institution designated civic reception seems to me supreme. As an opportunity to deliver messages of international good will where they bid fair to register, it seems to be that civic receptions stand next to the press and the wireless broadcasts, and of course the press are always represented at the receptions. I think I can also say that the mayors themselves attached considerable importance to them.”*

The first “Friendship Tree” was planted in Paul Harris’ own garden, in honor of Melbourne’s second club secretary, close friend and early leader of Rotary in Australia, Walter Drummond

Read about Parramatta where Paul Harris makes a profound statement about “international” character. 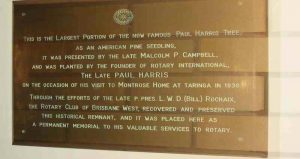 On his visit to Brisbane in 1935, Rotary’s founder, Paul Harris, planted an American pine tree in the grounds of the Montrose Home for Crippled Children at Taringa. The home moved to Corinda in March 1938; and the Rotary Club of Brisbane West used the trunk of this tree for the making of Rotary ornaments (1970-71), and they placed the bole of the tree with a suitable message in the entrance of the new Montrose Home. 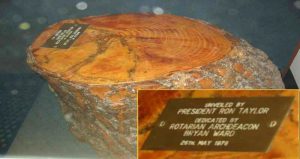 The Brisbane “Friendship Tree” is remembered

The living tree does not exist today. The original site of the Montrose Home where it was planted in 1935 is now the Kingsholme Apartments (180-190 Swann Road, Taringa), prestige blocks of units with great city views. Part of the tree trunk, fossilised and with an identifying plaque, remains on display … 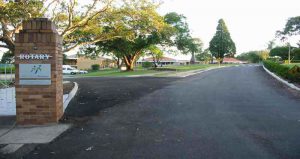 ….within the entrance area of the Montrose Queensland Society for Crippled Children administration building, Consort Street, Corinda. It may be viewed Monday to Friday between 8.00 am and 4.30 pm: the building is un-manned and locked after hours.

More on the Montrose Home can be seen at the Brisbane page, noted below.** 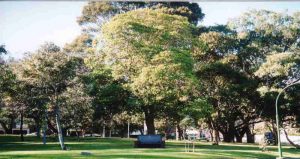 Here Paul met with District 65 Governor Angus Mitchell, later to be the first RI president from Australia in 1948. Paul and Jean both spoke at the conference and visited several cities while staying in Melbourne. 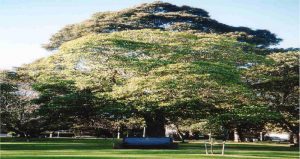 Memories of other trees

Paul recalls the first tree planted in his own “Friendship Garden” was in honor of the late Walter Drummond, second secretary of Melbourne. “..Many good will trees have been planted by Rotarians, including myself, in other cities in other countries, and many more doubtless will be planted, but the first of them all was Walter’s tree.” (Peregrinations II page 94 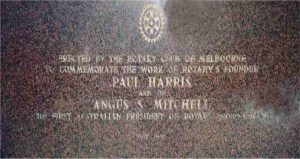 Plaque Dedicated to Founder Harris and Past President Angus Mitchell

“Jean and I planted “trees” in a public park near a tree planted by Past International President Sydney Pascall (1931, RC London) and I laid a wreath at the magnificent war memorial.” Perigrinations Volume II copyright Jean Harris 1935 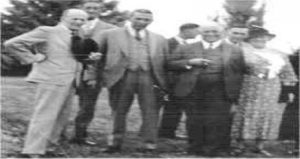 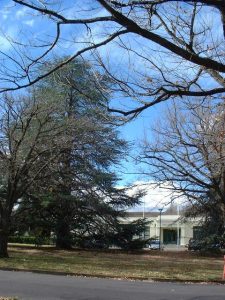 Paul and Jean’s tree! “From a tiny acorn…” 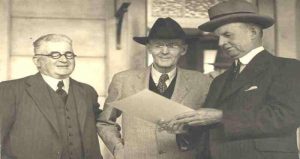 In 1935, Paul Harris visited Newcastle and planted a tree in Civic Park, opposite the City Hall, to commemorate the District Conference that he attended. 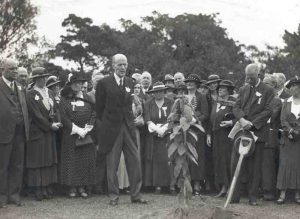 Newcastle tree across from city hall

The District Governor at the time was Tom Armstrong, a past president of the Rotary Club of Newcastle. In his book, “Peregrinations”, written after his Pacific journey, Paul Harris referred to his visit to Newcastle in glowing terms. 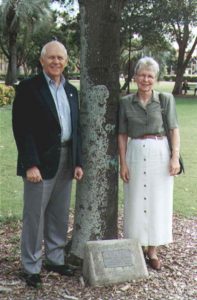 District 9600 DG (Brisbane) William H.C. Dethlefs and Noela in 2002. DG Bill is from RC of Maroochydore. His district includes Brisbane, site of the 2003 RI convention. Also, note above, Paul Harris’ essay from Parramatta, District 9690. The tree is located in Prince Alfred Park on the corner of Victoria Road and Church Street, Parramatta. Photo courtesy of the Rotary Foundation. 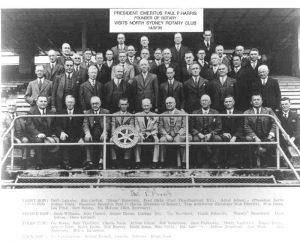 On 14 March 1935 the Club welcomed Paul Harris, the Founder of Rotary, to its meeting following which he planted a memorial tree (Queensland fire-wheel) in nearby St Leonards Park, after which a photograph recording the occasion was taken in the grandstand of North Sydney Oval next door. 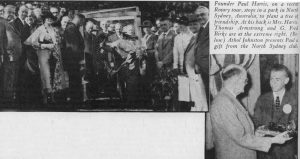 The Rotary Hourglass writes: Jean and Paul. From Sydney, Australia writes Past Director Fred Birks of Founder Paul and Jean Harris: (beside the picture) “It is not anything of news value to say that they have captivated our people. In all my life, I never met a woman who so quietly makes herself loved by other women. My typist met her only a few minutes and remarked that ‘She is the sweetest woman I ever met’.” 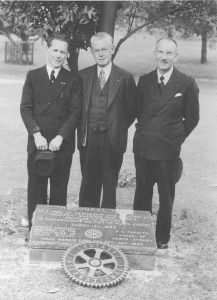 In September 1949, when the tree was some 15 years old (it still lives into the 21st century), following the death of Paul Harris in January 1947, a commemorative plaque was placed at the base of the tree. 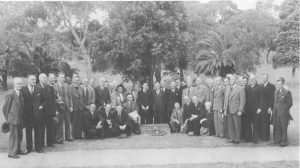 Dedication of the tree in 1949, continued

A second fire-wheel tree was planted nearby in August 1978 by the then R.I. President, Clem Renouf, on the occasion of the Club’s Golden Anniversary. 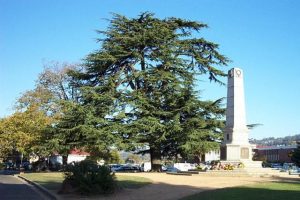 In 1931/32 RI President Sydney W. Pascall visited the Launceston and planted a tree of friendship in Royal Park. Paul Harris also visited and planted a similar tree in the same park in 1935. The photo above is the Paul Harris Friendship Tree in 2002 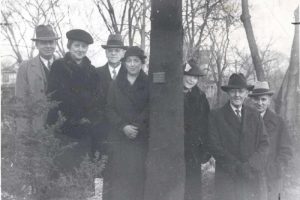 Paul and Jean Harris and others standing around a tree dedicated to the Rotary Club of Bendigo, Australia. Used in the February 1937 and June 1942 issue of The Rotarian 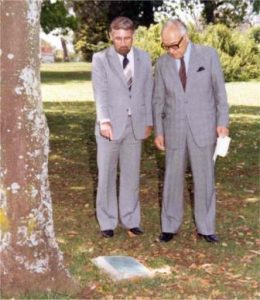 District 9920 Governor Edmund Lenthall and 1982-1983 RI President Hiroji Mukasa visiting a tree planted in Auckland, New Zealand by Paul Harris in 1935. Used in the February 1983 issue of The Rotarian. Use granted by Edmund Lenthall 13 February 2002 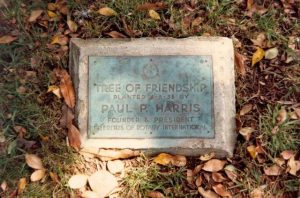 Marker for “tree of friendship” planted in Auckland, New Zealand in 1935 by Paul Harris. Used in the February 1983 issue of The Rotarian. 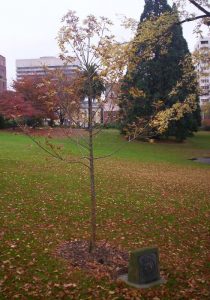 Paul Harris planted a tree in St. David’s Park in Hobart on 27 March 1935. The tree was severely damaged by winds in 2004 and had to be cut down. The Hobart City Council replaced it around September 2004. It is into autumn here so there are not many leaves left. 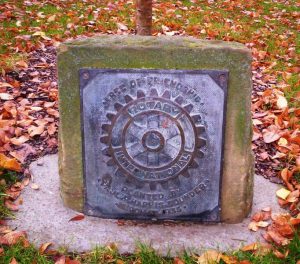 The tree was planted on 27 March 1935 in St. David’s Park in Hobart. The Park is inner city, very pleasant with a lot of trees and lawns. The memorial plaque is still there.