A Small Selection of Reports 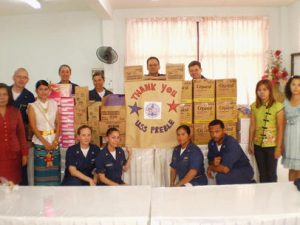 “The community is very pro-America here in Thailand,” said Peter Thorand, charter president in Thailand for the Navy League of the United States.
“The people here love the hard work that the Sailors do for the community and always welcome Sailors warmly whenever they volunteer for COMRELs.”

COMRELs are a way Sailors help and interact with each culture they encounter during their port calls.

“I try to volunteer for at least one or two COMRELs every deployment,” said Fire Controlman 1st Class (SW) David Drake, a Preble COMREL participant. “This deployment has been harder for me to find one since all the COMRELs fill up quickly with volunteers.”

The Navy League of the United States coordinated all the COMREL projects for John C. Stennis Carrier Strike Group in Thailand with the aid of the U.S. Embassy, while Project Handclasp donated all the supplies and goods that were donated to theKarunyawet Home for the Disabled.

“This was an incredible COMREL,” said Lt. Derrick Horne, chaplain for Preble and USS Kidd (DDG 100).
“Not only was the COMREL a huge success from the sweat and hard work we put into it, but it was also a great experience for all of the Sailors that volunteered to do this. They will always have the smiling faces of the people we helped out today in their memories, and that is a gift you can not put a price on.
This is one of the many reasons why I always enjoy coordinating COMRELS.”

2. From Mass Communication Specialist 3rd Class Dmitry Chepusov, USS John C Stennis (CVN 74)
PATTAYA, Thailand (NNS) — Sailors and Marines from USS John C. Stennis (CVN 74) volunteered 66 community service hours to clean a school and deliver lunch to students at Pattaya Redemptorist School for the Blind in Pattaya, Thailand, April 11.
Service members split up into two groups. One group cleaned courtyards, classrooms and playgrounds.
The other group took a walk on a nearby beach with some of the students.

“Our visit put smiles on faces,” said Aviation Boatswain’s Mate Equipment 1st Class (AW) Daniel Brandau of Osage, Iowa, who accompanied a blind student named Jorsor onthe walk.
“I didn’t know how to communicate with him, so I played music from my cell phone, and I think he really liked it,” said Brandau.
Brandau said he did not know what was expected of him when he arrived at the school, but he enjoyed the opportunity to spend time with the students.

The Sailors and Marine donated 50 lunch packs to share with the students, after the school was cleaned and the students returned from their walk down the beach.
To show their gratitude, some of the students sang folk Thai songs for Stennis personnel.

“We’re part of the international community,” said Program Specialist 2nd Class Pablo Monroy, strike group community relations coordinator. “This is our mission, and helping people on the front lines is how we show our support to that community.” 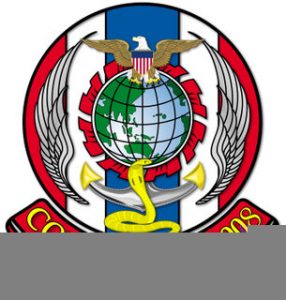 This year’s Cobra Gold was a prime example of the helping hand Sailors and Marines could lend to the community. The exercise featured overwhelming support from the U.S. Navy, said Peter Thorand, charter president of the Rotary Club of Taksin Pattaya, who set up several community service projects for Sailors to participate in during their port visit to Pattaya Beach after the exercise.

At one of the Cobra Gold projects that took place at a local elementary school in Rayong, Sailors from all three ships and Marines from the 31st MEU – nearly 100 service members in all – helped paint four classrooms. The participants also donated clothes, school supplies and even computers that had been gathered from shipboard personnel and the Sasebo community. At the end of that project, Sailors and Marines enjoyed a traditional Thai lunch and watched a special performance by the children.
===================================

A group of 25 Sailors conducted a community relations project Sept. 13, at the Hua Yui School in Pattaya. The Sailors painted part of the school and interacted with the teachers and students. The Sailors were also treated to a meal of shrimp fried rice prepared by the school’s cooks.

“One of the most gratifying experiences is helping those who need the most,” said Chief Gas Turbine Systems Technician (Mechanical) Paul Chum.

After the project, the group stopped for a traditional Thai meal. All of the Russell Sailors commented on how great it felt to be able to contribute to such a worthy cause.

“In my 23 years of service, this is the best community relations project I have had the opportunity to participate in,” said Master Chief Electronics Technician (SW) Randy Foust, Russell’s command master chief. “I look forward to coming back and working with [U.S. Navy League Pattaya chapter president] Mr. Peter Thorand in the future.”

“Mr. Thorand is a great friend of ours, and he always takes good care of Russell when she pulls into Pattaya,” said Chief Culinary Specialist (SW) Hermilito Bacalla.

“This has been amazing,” said Yeoman 3rd Class Margaret Ueberlauer, of Helicopter Anti-Submarine Squadron 2. “This was truly an eye-opening experience. It feels so good to know that I helped make a small difference.”

The 15 Sailors took the half-day community relations project seriously. From an in-depth tour of the center to handing out much-appreciated toys, books, games and candy, the volunteers immersed themselves in the world of the care center.

“These kids are so full of joy,” said Senior Chief Gunner’s Mate (SW/AW) Regina Hawley of Lincoln’s weapons department. “I feel so blessed to be able to come be a part of this today.”

The center is home to 26 children who have been orphaned by HIV and AIDS, and several of the children are infected with the diseases themselves, according to an informational pamphlet about the center. Since the center’s opening in early 1996, its staff and volunteers have cared for approximately 1,300 people affected by HIV and AIDS.

The men, women and children who are cared for at the center receive proper medication, hygiene and nutrition on a daily basis, making all the difference in their quality and length of life, said Douglas Paul Baird, a volunteer at the center.

“The medicine they receive here is a matter of life and death,” Baird said. “If they can get the medicine, they have a chance to live. How long they live is varied, but at least this gives them a chance.”

Baird gave the Sailors an in-depth tour of the care center taking them on a small informational tour to the nursery, the medical and dental clinics, the three main treatment areas and the craft center.

“We are trying to give these children some life skills. Our goal is to make sure they can not only survive out in the world, but that they are happy and well cared for,” Baird said.

The USS Abraham Lincoln Strike Group, homeported in Everett, Wash., is on a scheduled deployment in the U.S. 7th Fleet area of responsibility. Operating in the Western Pacific and Indian Ocean, the U.S. 7th Fleet is the largest of the forward-deployed U.S. fleets covering 52 million square miles, with approximately 60-70 ships, 200-300 aircraft and 40,000 Sailors and Marines assigned at any given time.

6. By Lt. Cmdr. Pam Warnken, Commander, Logistics Group, Western Pacific Public Affairs
PATTAYA, Thailand (NNS) — When the U.S. Navy-Marine Corps team operates inside of nations without American bases, it’s civic-minded contacts like Peter Thorand who help them make the connection with local citizens.
It was 1995 when Thorand, a Canadian citizen and member of the Rotary Club, stepped forward and began arranging community relations projects during naval exercises and port visits in Pattaya, Thailand.

“Up until then, an American executive had been setting up the community service activities in Pattaya, but he left the country, and there was no one to do the job,” Thorand said. “So I took it.”

Since then, when U.S. forces pull into port, as they did this summer for Cooperation Afloat Readiness and Training (CARAT), it’s Thorand who sets up their humanitarian and community service events. His magic ranges from staging band concerts in the city streets to helping the Navy Seabees build a cafeteria at a local orphanage. He’s also a key in Project Handclasp, where the chaplains and local Rotarians deliver toys to underprivileged Thai children.

Thorand arranged 10 community relations and civic action projects for CARAT 2002. His blueprint kept the service members on track with charitable work for a full week around this hot, tropical, seaside town in central Thailand.

Thorand says he’s learned a few things in his eight years of helping the U.S. Forces on the ground in Pattaya.

“I try to choose projects that will be fun for the troops,” he says. “It’s the excitement that I like, and I think they like it, too.”

This summer, Thorand set up medical and dental clinics in villages where treatment is unaffordable for the local people. Band concerts by the 7th Fleet Band, Orient Express, are also a popular attraction during CARAT, with performances in schools and shopping centers.

For the second year, Thorand arranged for the U.S. Army veterinarians from Guam to have the adventure of a lifetime – caring for large animals, namely oxen and elephants, at a local animal sanctuary. For Capt. Kimberly Lawler from Guam, it was an exciting change from her normal mission of food inspection and seeing cats, dogs, gerbils and other household pets.

“I’d never get to do anything like this in the United States,” she said. “I mean, how many elephants would come to your door?”

Thorand gets no real compensation for his efforts. The only rewards that he has received are ships’ ballcaps – he has a collection of 60 – and an award for meritorious public service to the U.S. Navy – bestowed a few years back by the Pacific Fleet Commander in Hawaii.

But on any given day when the fleet pulls in, like the five ships and 1,400 service members did for CARAT, Thorand is close by. With his cell phone in one ear and driver at the beckon, he leads the wide-eyed troops through the countryside, arranging for them to paint an orphanage or teach English to grateful school kids.

Thorand’s lean build and rapid-fire tongue is in constant motion. His German-accented English gives away his birthplace and is spiced with a working knowledge of Thai. He’s lived in Asia since 1984. It’s Thorand’s advance work that helps ensure U.S. forces have a positive, humanitarian impact, says Lt. Leslie Hull-Ryde, the public affairs officer for Logistics Group, Western Pacific in Singapore. Her command orchestrates the CARAT exercise each summer.

“Part of CARAT’s focus is to foster nation-to-nation contact on a human level whether it’s interoperability with the Thai Navy or sharing the American culture with the everyday Thai citizen,” Hull-Ryde said.

Crews of USS Vincennes (CG 49), USS Anchorage (LSD 36), USS George H. Philip (FFG 12), USCGC Morgenthau (WHEC 722) and USS Salvor (ARS 52) made up the CARAT Task Group this year. Within the first two days in port in Pattaya, just about everyone on the pier had met Thorand.

Word travels fast down the row of ships. The Sailors and Marines know that Thorand is an excellent expatriate contact and friend of the U.S. Navy in Thailand.

There really are too many to list. Above is a broad spread of hundreds of similar reports, collected by Thorand over the years.