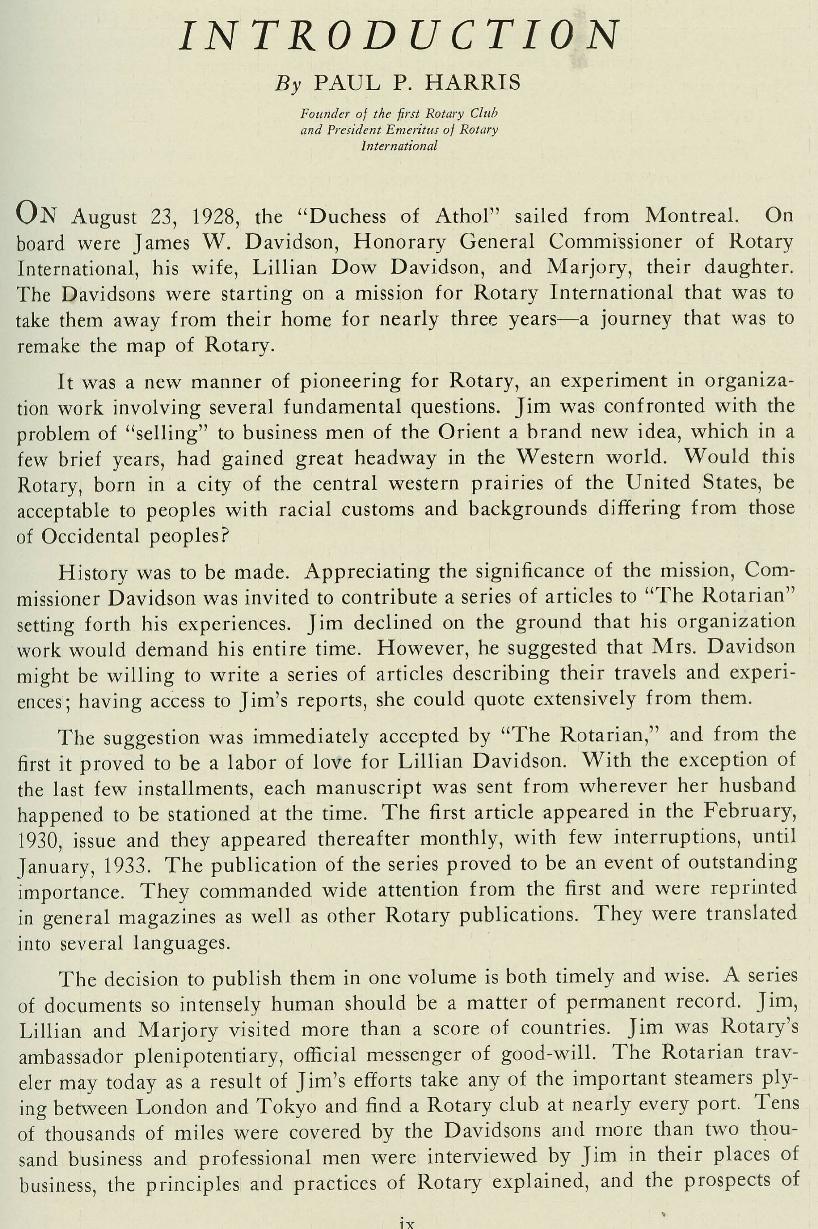 Mrs Davidson’s 1934 book was produced by Rotary International as a tribute to Jim Davidson who passed away a year earlier.

Lillian Davidson has sent her writings back to Rotary International headquarters as they family progressed throughout the near and far east. Much of the book would appear in “The Rotarian” magazine. The trip which began in August 1928 lasted almost three years and measured about 10,000 miles in distance travelled (and cost Davidson a rumoured $250,000)– such was the dedication of Jim Davidson and his family.

Paul Harris himself was delighted to write an introduction to the book (full text appears below) where he would describe Davidson’s trip as “a journey that was to remake the map of Rotary.”

The book clearly and extensively describes the new cultures that the Davidsons experienced.

Lillian first met Jim in Shanghai when he was American Consulate-General, a role he enjoyed and an experience that would serve him well in his Rotary mission.

In Turkey, Jim managed to secure the assistance of Government officials –especially the Prefect of Police of Constantinople, Sherif Bey- in order to sell the new, ‘western’ idea of Rotary to the Turks. Davidson himself had serious doubts as to whether Turkish Rotary would flourish. He said: “I felt that in few of the many countries that I would visit, could Rotary perform so great a service as in Turkey, for the Turks need a friendly world association which they do not now possess”.

In Athens, Greece, Davidson had testimonials from three US Presidents and British Prime Minister Ramsay MacDonald. He gained the support of the Greek PM Venizelos who agreed with Davidson that Rotary could only succeed if it united those with differing political views. In Athens, there were clear differences between the Royalists and Republicans.

As the Davidsons continued on to Egypt, the good work of London Rotarians became apparent in setting up the Cairo club. Stanley Leverton had encouraged W R Todd of Thomas Cook & Son (Cairo) in keeping a survey of potential Rotarians. Previous attempts in organizing a club – Sam Gluckstein of Hammersmith Rotary Club had attempted this task in 1927- had failed. The first meeting of the Cairo club on May 2nd 1928 only saw 5 present and by November 16 men of 8 different nationalities were attending meetings. Jim Davidson attended a December meeting before overseeing the official organization meeting on January 2nd 1929 with R Clare Martin of the Shell Oil Company the first President.

The Davidsons travelled through some of the world’s most tense areas from Palestine to Iraq. Lillian Davidson kept notes on her experiences which are worthy of description in themselves (though lack of space precludes this).

In India, Davidson helped found the Bombay club in March 1929 though Rotary in India was born in 1920 with the formation of the Calcutta club. Davidson was also successful in setting up a Rotary Club in Ceylon.

Travelling on to Burma, he helped establish the Rangoon club on September 2nd 1929 where the charter was presented by the Governor of Burma Sir Charles Innes.

In Kula Lumpur, Malaya, an English Army Captain had experience of Rotary. L D Gammans had saw a Rotary Club in action in Detroit in 1918 and his father was a member of the Portsmouth, England club. On July 20th 1928 a provisional club was formed.

Like many of the large Asian cities (with their Imperial ties to older European nations), Singapore was a cosmopolitan mix of nationalities. Rotary in Singapore had many different nations represented – from Americans to Armenians, from Japanese to Indians, from Italian to Irish.

In the Dutch East Indies Davidson met up with Past RI President Guy Gundaker in Java. Both men witnessed the organization meeting of the Batavia club on March 18th 1930.

In Bangkok, Siam an unofficial Rotary Club had been rumoured to exist. Chesley Perry had failed to corroborate this. In fact, the club, started by English barrister R D Atkinson had petered out in 1927. The Bangkok club was restarted on September 17th 1930 with the help of Atkinson and, of course, Jim Davidson.

Davidson would also visit Hong Kong and there he would find it relatively simple to introduce Rotary. The city was made for Rotary as 80 were present on December 8th 1930 as the club was organized. This would be Davidson’s last city in his programme of extension. He would continue to travel to Shanghai and throughout China, the Philippines, Korea and Japan.

Shanghai was where he had first met his wife Lillian as they both travelled on the Shanghai-San Francisco steam-boat back in 1905.

In total, Jim Davidson met 2,200 men in their offices as he spread Rotary extension throughout the rest of the world. He met, in total, men of 28 different races and nationalities.

Many were sceptical of the success of the mission. Could Rotary work in Asia? It seemed an impossible task to ‘blend’ such diverse nationalities, religions and cultures. Jim Davidson visited countries whose names and political systems have since changed; countries where conflict and tragedy still exists; countries where ghastly atrocities have since been committed.

Lillian Davidson recalled her husband’s simple maxim in her book –
”It is my husband’s belief that nowhere in the world can Rotary render a greater
service than in Asia where so much racial antagonisms exist.”
Cal Thomson ROTARY’S GLOBAL 23 July 2003
Source – Making New Friends by Lillian Dow Davidson
Rotary International 1934

By PAUL P. HARRIS
Founder of the first Rotary Club
and President Emeritus of Rotary International

August 23, 1928, the “Duchess of Athol” sailed from Montreal. On board were James W. Davidson, Honorary General Commissioner of Rotary International, his wife, Lillian Dow Davidson, and Marjory, their daughter. The Davidsons were starting on a mission for Rotary International that was to take them away from their home for nearly three years—a journey that was to remake the map of Rotary.

It was a new manner of pioneering for Rotary, an experiment in organiza­tion work involving several fundamental questions. Jim was confronted with the problem of “selling” to businessmen of the Orient a brand new idea, which in a few brief years, had gained great headway in the Western world. Would this Rotary, born in a city of the central western prairies of the United States, be acceptable to peoples with racial customs
and backgrounds differing from those of Occidental peoples?

History was to be made. Appreciating the significance of the mission, Com­missioner Davidson was invited to contribute a series of articles to “The Rotarian” setting forth his experiences. Jim declined on the ground that his organization work would demand his entire time. However, he suggested that Mrs. Davidson might be willing to write a series of articles describing their travels and experi­ences; having access to Jim’s reports,
she could quote extensively from them.

The suggestion was immediately accepted by “The Rotarian,” and from the first it proved to be a labour of love for Lillian Davidson. With the exception of the last few instalments, each manuscript was sent from wherever her husband happened to be stationed at the time. The first article appeared in the February, 1930, issue and they appeared thereafter monthly, with few interruptions, until January, 1933. The publication of the series proved to be an event of outstanding importance. They commanded wide attention from the first and were reprinted in general magazines as well as other Rotary publications. They were translated into several languages.

The decision to publish them in one volume is both timely and wise. A series of documents so intensely human should be a matter of permanent record. Jim, Lillian and Marjory visited more than a score of countries. Jim was Rotary’s ambassador plenipotentiary, official messenger of goodwill. The Rotarian trav­eller may today as a result of Jim’s efforts take any of the important steamers ply­ing between London
and Tokyo and find a Rotary club at nearly every port.

Tens of thousands of miles were covered by the Davidsons and more than two thou­sand business and professional men were interviewed by Jim in their places of business, the principles and practices of Rotary explained, and the prospects of organizing a Rotary club locally discussed. The use of the services of an inter­preter was frequently necessary.

There were disappointments and hardships, to be sure, but, on the other hand, there were experiences and adventures in friendship which far outweighed tem­porary discouragements. Jim Davidson’s unfailing diplomacy, his enthusiasm for Rotary, and his remarkable capacity for work, carried him over many seemingly insurmountable barriers.

Someone has said that “Books Are Men.” Truly this volume, “Making New Friends,” represents not only three years in the lives of the Davidson family, but reflected on its pages, is a lifetime of adventure and journalistic experience. Both Jim and Lillian Davidson were keen observers. They missed very little of impor­tance. They peered beneath surface conditions. Their stay in certain countries —notably Turkey—was coincident with vast political and social changes. They wrote (and I am including Jim, as his Rotary reports account for a considerable portion of this volume)
with understanding eyes, and hearts full of sympathy for the misfortunes of others.

Their book comprises an interesting and authorita­tive study of the peoples of the Near and Far East.
Through their narrative runs a Rotary thread that gives color to the fabric.

“The great lesson,” Jim wrote, “to be drawn from mingling with the edu­cated native peoples of all these countries is that in each race or nationality one finds many things to admire, virtues that perhaps we are lacking; and their defects, after all, are not more striking than our own. They are apparent to us because they are different.” Friendly travelers to the Orient will appreciate this concluding observation: “If the Asiatic looks strange and eccentric to us, you may rest assured that we appear the same to him. If he irritates us, we irritate him, only he is generally too courteous to show it. We, of the West, in our inter-racial contacts, are often lacking in the good manners which characterize Asiatics.”

That paragraph could well be made the text of the International Service Committee of every Rotary club interested in promoting friendship and under­standing beyond its own national frontiers. Nations aspire to become the biggest and strongest of all nations. A spiritual pauperism exists in the midst of much material wealth. There is too much “Take” in the world, and not enough “Give.”
This is reflected in business contacts and also in international diplomacy.

Jim Davidson, in organizing new Rotary clubs, was engaged in the noble work of making new friends. His string of clubs across
the face of Asia will prove to be an effective agency for goodwill and understanding.

No one who reads this book can fail to gain a better conception of Eastern peoples and governments.
Even if it had no other purpose, in that alone, it would be well worth while.