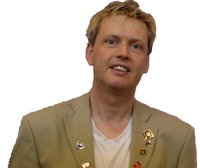 District 1020 District Rotary Foundation Committee Chair 2007-10, District Grants Sub-committee Chair 2004-07, Member, RIBI Foundation Committee 2009-10, Zone 17 Co-ordinator RI Health and Hunger Resource Group 2009-10, Researcher/writer and History Fellow for Rotary Global History since the winter of 2001 Cal is also the coordinator for the conventions and convention host clubs sections. He is also contributing editor for “Our Foundation Newsletter” and a former contributing Editor of What Paul Harris Said 2006-08. Since 2011, Vice President of History for RGHF, and an essay writer since 2011.

“Looking at my Pelican History of America’s index, I cannot find any references to “Rotary” or “Paul Harris”. I do, incidentally, find the names of some eminent Rotarians such as Woodrow Wilson and Franklin D Roosevelt.

We shall have to find our own history.

Understanding the past is, obviously, important in helping to explain the present. Why, for example, did the movement expand so rapidly? The answer lies with the early pioneers who understood that the “Booster” concept of self interest was flawed and only appropriate for short-term advantage. If the movement could adapt to serve the community both at home and abroad, it would be able to attract men (and women) from every part of the globe.

Rotary has to provide history as a resource for all of its 30,000 clubs. In the age of the world-wide web, it is so easy for one inaccuracy to spread like a common cold. The “History of Rotary” Project web site should be a repository of all definitive answers.

Rotarians, the world over, can examine the past and also read of Rotary critics such as G. B. Shaw or H. L. Mencken and realise that in reality, the sternest critics are club members themselves.

So, let us learn from the past and try to live up to those who began these Adventures in Service.”