In June of 2008, named RGHF’s number one contributor since our founding. 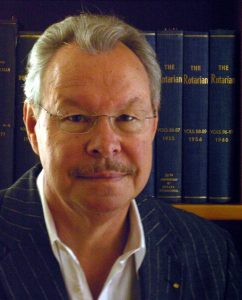 Ziegler has been a contributor and editor to this project since 2001. (Shown on the left with his bound copies of The Rotarian magazine) He is also an avid collector of Rotary memorabilia, generously contributed to his history project. View the Ziegler Rotary Memorabilia collection here.

Mr. Paul P. Harris occupies an almost unique position among leaders of men, in that the movement which he initiated in the city of Chicago in 1905 has, within his own life-time, become a world-wide force of impressive scope and power. Seldom does the founder of an organization live to see his dreams fulfilled within the span of a single generation. The extraordinarily rapid growth of Rotary throughout the world is a phenomenon the history of which, when it is finally written, will be fascinating.

When our board changed on Saturday, June 30, 2007, I was pleasantly surprised to receive the PHF.

The PHF was explicitly awarded for my contributions to Rotary’s history.

Well, you started it, and from small seeds …