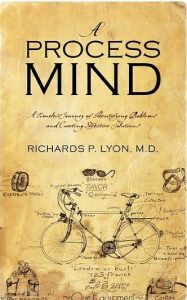 A few weeks ago, Brenda Speth, my boss and publisher of the Napa Valley Register, handed me a book titled “A Process Mind,” written by a Napan, a retired surgeon named Richards P. Lyon, M.D. It quickly became a book I could not put down.

The author explains the title of the book up front: “I must understand to remember. This takes more time than is required by Quick Memory minds. However, it is the remembering that makes the difference and allows me to tell the story today in the hope that I will be effective.”

And effective is always the bottom line.

The story, which spans almost 100 years in 20th-century America, is a wholesome story of a typical American family: mom, dad and three boys, Richards, Ted and Bruce. The Piedmont family is wealthy for just a little while. His father owned the Lyon Storage and Moving Company, the first of its kind west of the Rockies.

The author remembers the Great Depression of 1929 well. It changed everything on the surface, but the basics of a family’s will to survive remained solid and never wavered.

The author also remembers the day nine years later, when his father, who had seen his fortune disappear, proudly announced to Dick: “Your dad does doesn’t owe a single cent to anyone!”

That was in 1938, and to this very day Dick’s eyes tear with the thought of that precious moment.

Education was a must in the Lyon family, and somehow, with dad’s help plus odd jobs like slinging hash, Dick went to Stanford University. A tall boy and an athlete, he became a teammate of Hank Luisetti, a basketball legend who would revolutionize the game.

In 1938, there would be an interruption in Dick’s Stanford life that would take him and his brother Ted on a worldwide trip for eight months. 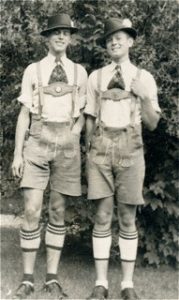 That spring his grandmother Richards died of kidney failure. Dick and Ted were each to receive $800, a hefty sum in those days, but it could only be spent for riding bicycles all over Europe.

Quite a bounty and quite a trip, to say the least.

Dad and mom, faced with a commitment for their two boys, decided that the $1,600 could be stretched. Dad found help from Paul Harris, (see letter below) founder of the Rotary, then established in 57 countries. The boys were made Rotary Ambassadors of Goodwill, and the tour was expanded to include Japan, China and the Philippines, after which they traveled by ship to Marseilles, France. 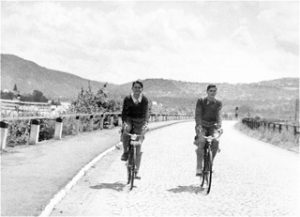 In Europe, the boys purchased French light racing bicycles for $22 apiece, and off they went on a 3,000-mile journey fulfilling grandma’s wish. And what wonders they saw in 1936 Europe: France and the Riviera, Paris and Holland, south to Italy and east to Germany, crossing hills and valleys and bridges over canals. Il Duce in Rome was speaking from his palace in Piazza Venezia and boasting of his conquests in Ethiopia. In Germany, a nation awaited the Olympics, and Herr Hitler was planning for war.

Eight months later, they came home via the port of New York. In that crowd, dad was waiting for his boys. He bought a Buick to take his boys back to their home in the Golden State.

For Richards, there was a switch from engineering to medicine after a college friend decided he was going to become a doctor. Richards said “Me, too!”

The medical student and intern became a junior lieutenant in the Navy as the nation went to war in 1941. That Navy appointment turned into an assignment as a battalion surgeon in the Marines. Richards was assigned to the invading force that met and defeated the Japanese on bloody Iwo Jima.

He survived that tour in hell, but on his return to Hawaii he got his back mail. The latest letter from mom and dad said that kid brother Bruce, an airman, was missing in action over Europe on his 32nd mission. To this day, Bruce’s Purple Heart graces Richards’ computer. Sweet memories never die.

Richards’ story, “A Process Mind,” had me thinking of the lives of the fictional characters Walter Mitty and Forrest Gump — except for the fact that Dr. Richards P. Lyon was really there and saw it all — Il Duce, Herr Hitler, Hank Luisetti, cycling all over Europe, Olympics and Iwo Jima.

Home from the war, Richards continued his medical studies, which took him from coast to coast. As a doctor specializing in urology, he saved countless lives through his skill not only in the U.S., but as far away as Pakistan.

Now in retirement, the doctor is using his knowledge to encourage others to follow his path and, by the use of their “Process Minds,” to gain the insight to become effective, the bottom line in all of his years as a surgeon.

He writes, “Power and financial compensation are no substitutes for self-realization and satisfaction in terms of saving other human beings.” His words ring true.

Quite a book, and quite a man. Thousands of people, starting with his wife, Carol, and daughters, Kathy, Joan and Laurie, can honestly say “There is a man, one of a kind, whose life of service will live on forever!”

“A Process Mind” is published by Outskirts Press Inc., Denver 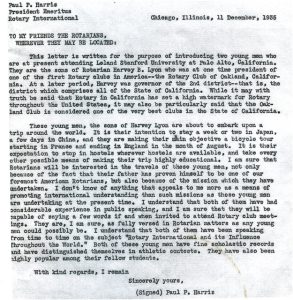